Everything is being redesigned to be “on the go” when it comes to personal computers. Laptops are becoming tablets, tablets are becoming cell phones, but desktop PCs designed for creative work have been largely unaffected until now. MSI is now looking to turn Workstation PCs portable with their new series of GT laptops.

The basic design for the new MSI GT60 20K and GT70 20J are the same as the MSI GT Series gaming laptops shown off at COMPUTEX 2013 along with the same base name. The difference between the two versions comes from the use of Nvidia Quadro K2100M and K3100M for graphics muscle. The MSI GT60 20K and GT70 20J are certified by Adobe, Autodesk, and SolidWorks. All of which give their seal of approval to allow the MSI GT series to run these most commonly used professional applications.

These are great workstations for those who need to be able to take their work with them, but I am not sure this was right platform to build it on. I don’t think “heart pumping audio” was a bullet point for professionals using AutoCAD (but Adobe Premier Pro users might be a little more impressed). More details of these laptops are covered in the full press release below.

“MSI has long been praised for the performance of our gaming laptops, and the new workstations leverage that expertise to deliver the same quality and effectiveness for professionals,” said Andy Tung, vice president of sales for MSI Pan America Region. “We’ve successfully combined the power and design of our acclaimed GT70 and GT60 laptops with the performance needed to tackle professional applications.”

The GT70 2OK and GT60 2OJ are currently available for $2,599.99 and $2,009.99 respectively at Newegg, Amazon, Tiger Direct, BestBuy.com, B&H Photo, and Adorama. MSI plans to expand their line of mobile workstations in the following months with a 17” K4100M model and a 15.6” K3100M model. For more information on MSI’s entire selection of workstations and mobile solutions, visit http://www.msimobile.com. 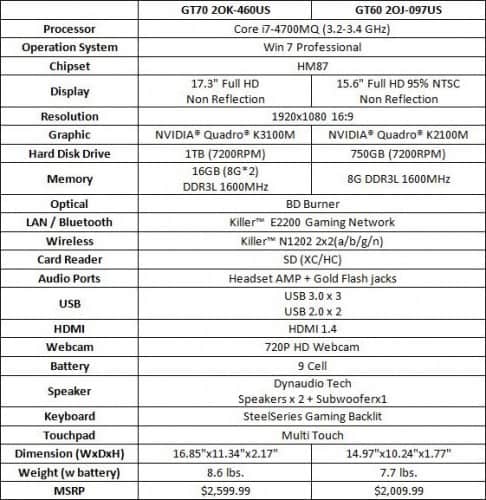