Search
Home
Reviews
Prev4 of 9Next

With the exception of our respective boards from ASUS, MSI and GIGABYTE, we maintained a uniform test setup for all of our benchmarks and feature testing. Part selections were reasonable reflecting what normal human beings with limited pockets would choose to pair with this budget but versatile platform.

All of the components were assembled on top of a HighSpeedPC Tech Station. We also added two CoolerMaster case fans in order to represent a real-world power consumption scenario. Unless otherwise stated, our benchmarks are based on the default settings offered by our chosen benchmarks. In the spirit of value which seems to be the hallmark of this platform, we’ve stuck to benchmarks that are free and that anyone can download and try. This allows you to easily check your results against ours without any special software or equipment.

Before any testing happened, every system was put through a 24 hour burn in using 3DMark Vantage at the Extreme setting. This ensured that we had good and stable hardware before logging our benchmark numbers. Let’s get to work!

This is a great synthetic benchmark that gives you an overall snapshot of how your system performs. The categories are broken down so that they can be easily compared across systems. We’ve benchmarked all three boards with the same components and have compared them in the graph below. 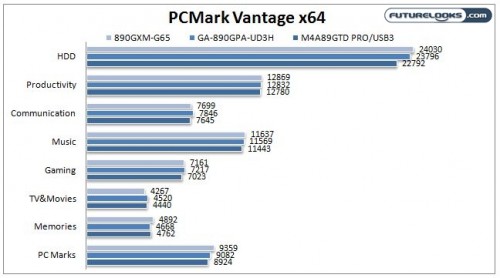 While the benchmark is synthetic and may not represent all real world situations, it does give you a good impression of how each system should perform in other benchmarks. Based on the results, we can see that the MSI edges ahead in HDD, productivity, music, memories and overall performance. However, the GIGABYTE takes the win in communication, gaming, and TV & movies. The ASUS seems to take up the rear with the exception of the TV & Movies category which mainly tests encoding of video files. However, in the big scheme of things, the differences are so minute that you’d be hard pressed to really notice these differences. 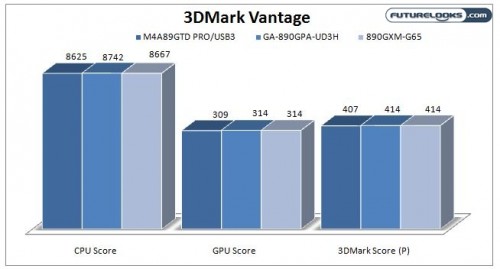 Just like what was revealed in the PCMark Vantage x64 benchmark, the ASUS takes up the rear for both the CPU and GPU score as well as the overall score. It makes me wonder if the vast number of hardware features (or the weird VGA Switch Card) might be at fault for it’s slightly lower performance. The MSI continues to perform well and the GIGABYTE takes the lead in the CPU score.

This benchmark really takes your system to task by stressing its CPU and Memory and how well the system utilizes both. It also gives a kick to your GPU in the OpenGL department. 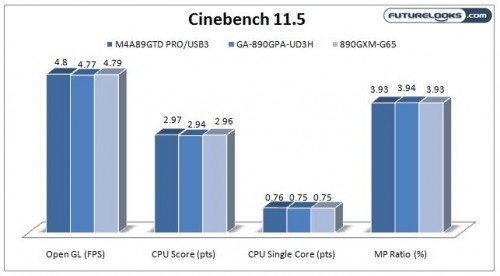 The ASUS seems to redeem itself in the OpenGL, CPU, CPU Single Core and keeps up in the MP Ratio %. Again, a lot of these tests are, in reality, so close that it’s really not worth stressing about. Ideally, we’d like to see all of these 890GX boards score about the same in all of our tests. It’s when there is a severe difference that we should be worrying and so far, none of these boards are throwing up a red flag.

Now that we’ve gotten the overall system benchmarks out of the way, we can see that the three boards really are comparable. Other than some minute differences on the negative with the ASUS board, the trio of boards is more or less the same in terms of overall performance. Let’s move on to some of the more functional benchmarks including a look at both SATA 3.0 and the optional USB 3.0 implementation of our boards.