Search
Home
Reviews
Prev6 of 7Next

Only a few DirectX11 benchmarks were tossed in to test each board’s SLI graphics performance since it taxes the systems the most. If your system can run them fine, then it won’t have any problems running DX10 and DX9 games. 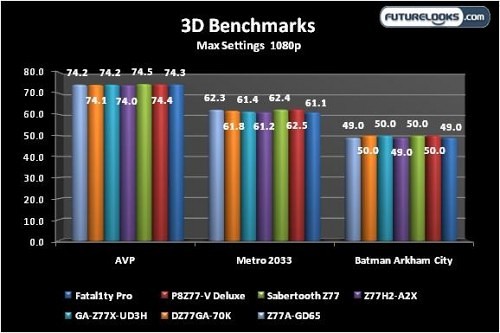 Like I mentioned, average frame rates are very close. This is why we aren’t going to bother you with 20 other random game benchmarks. The reasoning is that each board has the potential to provide any level gamer with an experience that they’ll love with any GPU setup in their budget.

3DMark11 is affected a bit by a system’s BIOS and resources just like Cinebench in that CPU turbo, specifically the frequencies and the length of the boost, can improve performance. The ASUS boards are naturally more aggressive. Even if engineers add a little extra tuning, it’s still part of the board that will benefit end users. We’ll take everything we can get.

Many of the boards have native and third party SATA3 and USB 3.0 controllers. All the boards offer USB 3.0 via the Z77 PCH. However, the P8Z77-V Deluxe and Z77 Sabertooth are the only boards to offer Intel USB 3.0 Turbo and an extra ASMedia USB 3.0 Boost feature. To measure the benefits, I started with CrystalDiskMark. 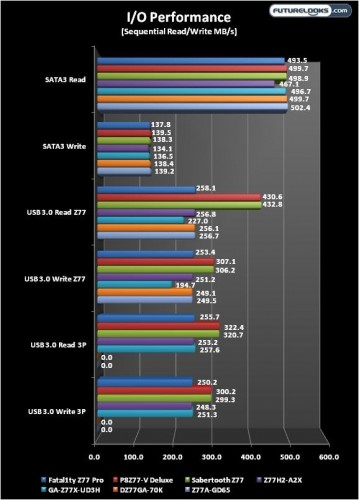 SATA3 performance is pretty similar. Standard Intel USB 3.0 bandwidth was also similar between the boards though the Z77X-UD3H was slower for some repeatable reason. ASUS’ USB 3.0 Turbo and Boost features (which are built in to ASUS AI Suite II) provided noticeable performance gains in sequential performance. Additionally, the ASMedia USB 3.0 controller allows for more than 1 queue depth which is a good thing for external storage devices which support the latest UASP standard. Have a look at ATTO Disk Benchmark comparing USB 3.0 Turbo and Boost. 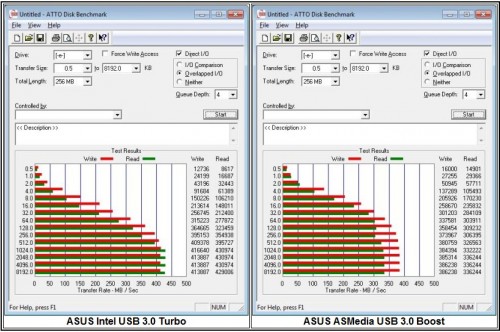 While sequential performance is better on the Intel PCH (left), it’s the 4.0 data performance that favors the ASMedia. This performance will favor the ASMedia controller when connecting external storage like a multi-drive RAID array or docking stations with big drives. They need the bigger queue to respond to more requests. 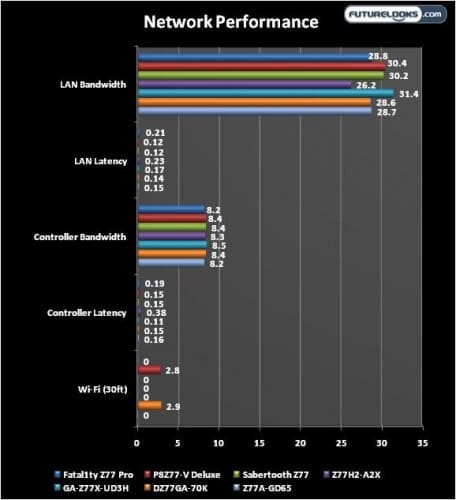 Network performance is comparable across all the boards. The boards with Intel LAN controllers were a bit faster. Given the distance and two walls between the wireless access point, the Deluxe and 70K Wi-Fi did well. Unfortunately, the ECS board’s problematic network wouldn’t work. There was no performance gain using any of the bundled “network software” with any of the boards. Those utilities simply allow prioritized program control to manage any unnecessary network usage. If you want the best control, you have to bypass the Windows network stack. Currently, only Bigfoot Networks and their Killer NICs truly do this. Unfortunately, none of the boards in this particular round up were using that network controller.

Both Unigine Heaven 2.5 demo and OCCT Linpack with high memory were run at the same time to represent a maximum system load situation. The numbers below are actually the maximum amount of wattage recorded on the meter. Chances are you’ll rarely push your system this hard but you at least get the consumption picture. 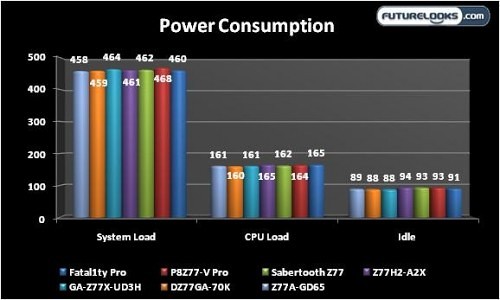 In perspective, there wasn’t a big difference in power consumption between the systems. It was close at idle and when just the CPU was loaded down. The Z77X-UD3H spiked to 464 just a few times. But on the average, all the systems pulled about 430 watts over a 30 minute period. If you were wondering if that 650 Watt PSU was enough, now you know.

How is the Integrated Audio Performance?

Integrated audio will satisfy most users as long as it doesn’t cut out, crackle, hiss or has channels leaking. Proper implementation will prevent that from happening. RightMark Audio Analyzer was used to find the best 24-bit, 192Hz score since these are all HD audio processors. Let’s take a look and see who has done their homework.

The best audio experience is going to be heard from the ASUS and GIGABYTE boards. The ASUS Z77 pair get down right deep when running game benchmarks. However, the audio channel separation on the GIGABYTE Z77X-UD3 is quite nice and extremely clear when listening through a high quality 150 ohm headset. Let’s just say, I got my beats on while writing with that board. It’s something that GIGABYTE has learned from their G1.Killer experience and it seems that board’s from the UD3H up alos benefit from better audio performance.