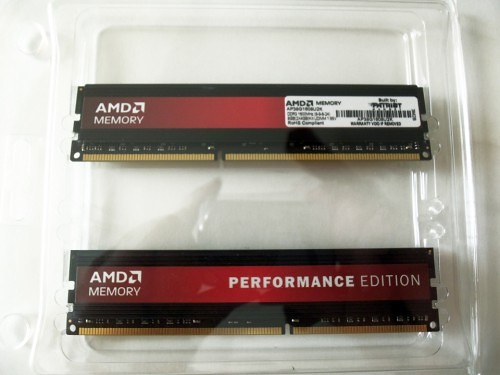 It is always a good idea for a company to grow into other markets as it expands. As they say “It’s simple: Overspecialize, and you breed in weakness. It’s slow death.” I will not argue the validity of this statement, but it seems to be true at least for large corporations and AMD is no different. The most recent expansion in the public market for AMD is to offer memory kits bearing their brand. Today I will be testing the AMD Performance Edition 8 GB memory kit to see if memory is going to be the third market AMD plans to fight over.

Specification and the Packaging 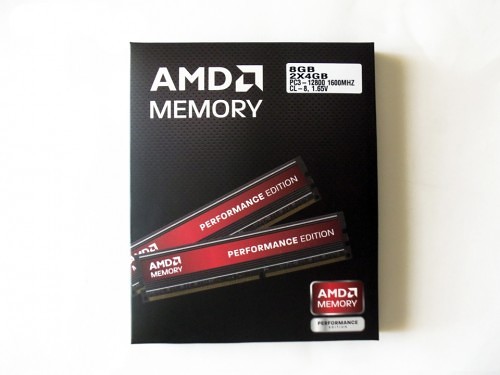 The first thing you see with any item is the packaging it comes in. In this case Patriot Memory, the company that AMD has hired to brand their modules, decided to go with a simple approach. The box is mostly black.

The front image is a picture of the RAM with a gray metal panel in the background with ventilation holes. The entire rest of the package seems to be focused on ensuring that people know that this is an AMD product. Their name is everywhere and I actually like this approach as the red from the AMD logo and white writing brings some much needed color to the packaging.

The AMD Performance Edition memory kit is the middle child so to speak as AMD will offer three memory kits. One for the entry level user, one for the performance user, and one more suited to enthusiast and overclockers.  As noted earlier, AMD’s product is manufactured by US based Patriot Memory LLC.  The Performance Edition memory I am testing is DDR3 1600 MHz (PC 12800) with 8-9-8 timing at 1.65V. It has a all black aluminum heat spreader, RoHS Compliant, and designed to work with either Intel or AMD systems. The black aluminum heat spreader is complemented by the all black PCB used for the memory as well. 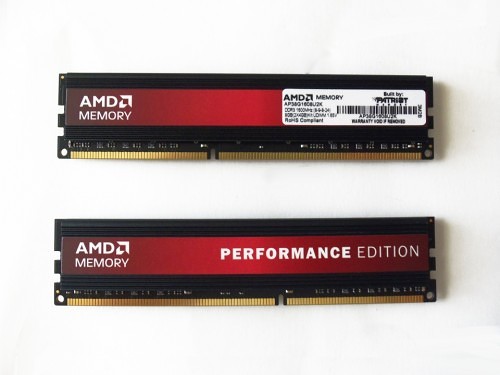 Much like the packaging of the RAM, the AMD Performance Edition memory is highlighted with red and white. The other thing you notice is the head spreader does not add any additional height to the RAM. This ensures it can be used with even the largest coolers. This is a good move as the larger head spreaders are often not needed and do not help with DDR3 RAM nearly as much as it did with previous generations of RAM.

The memory modules are backed by Patriot Memory’s standard Lifetime warranty and retails for around $54.99 US at most retailers. 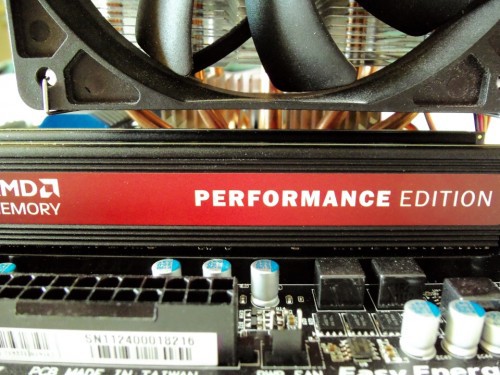 This time I am going to minimize the number of tests. Some sites like to use several different programs that test the same feature over and over again. This creates confusion in my opinion. I will be using the same core software package I normally use, but will focus on the influence of the new memory kit. I will be emphasizing total system performance, the effect on CPU, and raw memory throughput.

All comparisons are done against the memory I have been using for all my testing thus far which is the G.Skill Patriot Ripjaws 2133 MHz 8 GB kit. I normally use this RAM at 1866 MHz (9-10-9-27) at 1.65V and these test will be no different. It will also give us a chance to see if the the increase in memory clock speed has a bigger impact than the AMD Performance Memory more aggressive timings.

Now that we’ve established our test environment, let’s move forward to the benchmarks shall we?