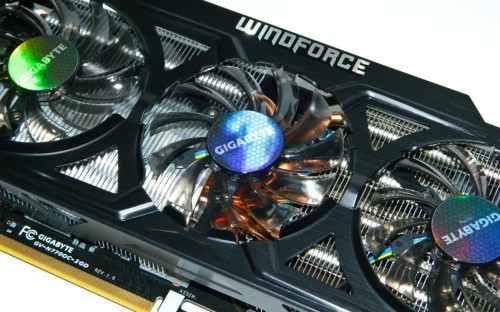 Current graphics intensive DirectX11 games look amazing with the settings turned up. With detailed textures, lighting, and action, it’s a shame that anyone has to turn down settings just to get 30 frames per second. If you’re having to do this now, then you’re probably going to miss out on hot titles such as Assassin’s Creed IV Black Flag, Batman Arkham Origins, Need for Speed Rivals, Splinter Cell Blacklist, Watch Dogs, and Battlefield 4 all scheduled for release very soon. All of these games look their best when played on a system with a capable video card. So what card do you need to get the most out of these games? The GIGABYTE GEFORCE GTX 770 2GB OC WindForce 3X wants to be on the short list. 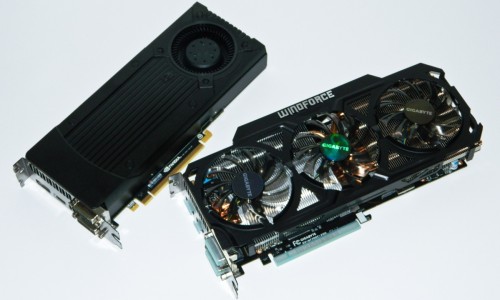 GIGABYTE offers six different model GTX 770 cards that come in stock/OC (factory overclocked) and 2GB/4GB flavors. Some may be region specific while others like the OC model seem to be most commonly sold. Naturally, the OC models have a higher GPU base clock and boost clock frequencies. These kinds of cards are built with a cherry picked GPU to support the frequencies and can be quite a bit faster than stock cards.

Here’s a break down of the two 2GB and 4GB OC versus the reference GTX 770. 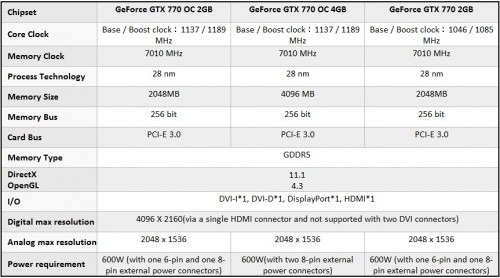 The GV-N770OC-2GB OC can be found for as low as $369.59 US while the GV-N770OC-4GB OC is sold for as low as $449.99 US. Regular clocked GTX 770s are pretty much all locked at the $399.99 US launch price which makes the GIGABYTE OC models quite a bit more attractive. As far as performance between the 2GB and 4GB, it pretty much comes down to the number of monitors you plan to use and whether the game choice will require that extra texture memory.

Currently, the GTX 770 2GB is enough to satisfy most for any DX11 game even with maximum settings. However, the 4GB card typically works more smoothly for multitaskers that game on one monitor and keep background apps up on another. 4GB will naturally benefit any future games with very large mapped areas since depth of field type settings eat up a lot of memory.

Thus far, I haven’t seen any games (yet) that are large enough to stop the GIGABYTE GTX 770 2GB OC card or any 2GB card for that matter. 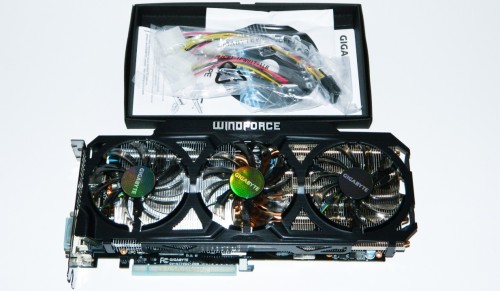 The bundle pretty much consists of only the items that are typically needed to connect the video card. Two Molex to 6-8pin adapter power cables are included just in case you have a some what older power supply. Keep in mind the minimum recommended power supply is 600 Watts so the need for this part seems questionable. But it’s nice to have.

Some documentation and a software DVD is included. It contains a WHQL NVIDIA driver and OC Guru II monitoring and overclocking utility. No games have been bundled with GIGABYTE cards for some time, which keeps the price down. Although, we’ve seen NVIDIA offer up promotions as of late for various GPUs with purchase. 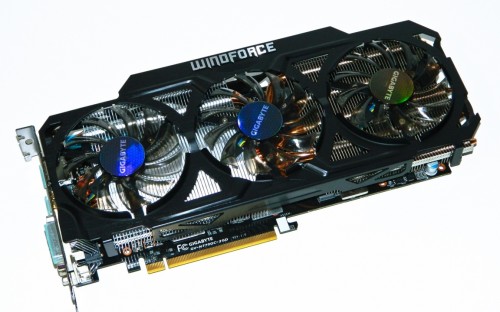 As you can see, the GIGABYTE GTX 770 OC is a pretty sexy graphics card. In fact, all of the cards feature the same WindForce 3X GPU cooler but have a different GPU underneath. In fact, GIGABYTE’s GTX 760 series of overclocked cards also uses this same cooler.

A black aluminum fan shroud extends the length of the card. The shroud design is a good step in cutting some weight off the card versus solid fan shrouds. Basically, the design ensures the three 80mm smoky black acrylic fans ensure air hits the entire card. There is also a stabilizing bar across the top that keeps the PCB from flexing.

The GTX 770 OC Kepler GPU is powered by 8+2 phase voltage regulation. A good implemented VREG can enhance GPU Boost and lower wasted power consumption in the right situations. POSCAPs (the little flat transistor looking circuits) augment the VREG. For video cards, this is a good design and a smart move as it keeps things very low profile.

Test System Setup
I decided to use an elite system build used at the Intel Lanfest Infernalan one more time. This is a great gamer and overclocker oriented system. I don’t have to worry about the system’s stability ever. The only time this system crashes is when I forget which power strip it’s using.

The display is an ASUS VG278H 3D 1080p monitor. Game settings are all maxed out to make the GPU work hardest. Frame rates were recorded with regular mode and then verified to handle 3D game settings at the end. Temperatures were monitored with GIGABYTE’s OC Guru II utility. For power consumption numbers, a Seasonic Power Angel at the wall was used to determine the data. We recorded noise levels with a meter at 2 feet distance in an open and closed computer case. One final note is that the HD 7970 GPU was tested with PhysX disabled because it obviously doesn’t support the feature. At least not officially.

Let’s get down to testing and overclocking!