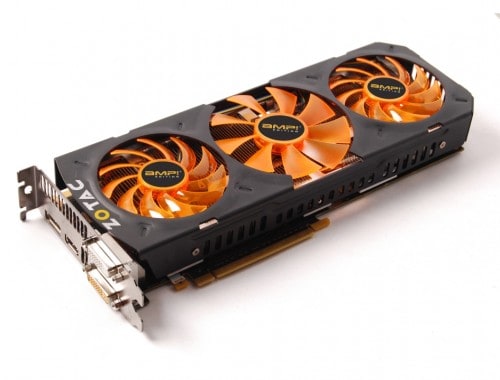 Healthy competition amongst graphics card companies is always good for the end-user and consumers in general. ZOTAC and its AMP! series is always out to prove they are the best with each card generation and their response to one of  NVIDIA’s latest GPUs is no different. They are ready with the new ZOTAC GeForce GTX 780 AMP! which is here to turn some heads and crush some games.

The new ZOTAC GTX 780 AMP! breaks new ground by pushing the GPU core well beyond default speeds. In fact, the core GPU is pushed well past default Boost speeds at 1006 MHz making it faster than most GTX 780’s without its own boost (1059 MHz). Now the 16 percent boost in performance is nice and all, but why stop there? The ZOTAC GTX 780 AMP! not only brings a great factory overclock, but does it while being 10°C cooler and 15 dBA less noisy than the reference design by NVIDIA (reviewed here). This is thanks to the Triple Silencer cooler.

The best part is the price which is as low as $649.99 US. It’s available now, cheaper than many stock GTX 780’s, and gives you better performance while being quieter and cooler. Only Galaxy’s GTX 780 HOF Edition offers more overclocking headroom, but comes in at $689.99 US.

More details on ZOTAC’s entry can be found below in the full press release.

“Our engineers spent extra time fine-tuning the ZOTAC GeForce GTX 780 AMP! Edition to perfection,” says Carsten Berger, senior director, ZOTAC International. “We took that extra time to push the base clock past 1 GHz for up to a 16-percent performance boost and topped it off with our brand new Triple Silencer enhanced cooling system. The result is an amazing graphics card that‘s faster and quieter.”

A brand new ZOTAC Triple Silencer enhanced cooling solution that incorporates three quiet high-performance fans that reduce temperatures up to 10°C and noise levels by 15 dBA under heavy gaming loads is exclusive to the GeForce GTX 780 AMP! Edition. The ZOTAC Triple Silencer is finished off with signature orange fan blades and a black fan shroud for styling that looks as good as it performs.