For over twenty years, Future Sonics has been supplying their custom made “EarMonitor” headphones to some of the most elite musical acts. Names like U2, REM, Justin Timberlake, and Carrie Underwood, just to name a few, rely on Future Sonics’ custom in-ear monitors to give them the best possible reproduction of their music while on tour or in the studio. However, at $898 US for a set, their handmade in-ear monitors were out of reach for most of us mere mortals. 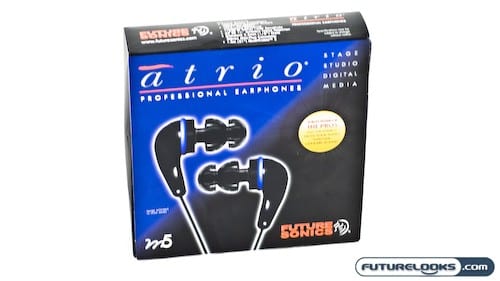 Three years ago, they took their sound quality first design philosophy and began building a more affordable version of their elite product. The Future Sonics Atrio Series is the result of this work and at $199 US for a set, they still aren’t cheap, but you can’t argue with the pedigree. Let’s see if they’re worth the green.

The biggest differences between the $199 US Atrio Series and Future Sonics top end $898 US EarMonitors is not only the sticker price, but a new driver called the MG5pro. The driver is still “studio grade” and still handmade and even sports slightly better lower frequency response to 18Hz vs. the 20Hz of the top end product. Also, instead of being custom fitted to each user, the Atrio provides a universal fit through the inclusion of different ear pieces. Future Sonics does provide a custom fitted “SoftWear” ear piece option for an additional $149 US if you’re used to that custom goodness.

While the top end product gives you replaceable cables, the Atrio makes do with a more economical fixed configuration and are fitted with a set of their 51″ (1.3m) QuietCable II wires and use a standard 1/8″ (3.5mm) headphone jack. The smaller size of the Atrio’s ear pieces also makes them a little more practical for packing with your MP3 player of choice.

Inside the box, you’ll get a quick start guide, four sets of “ComfortFit” foam earpieces which include two of the large and two of the small sizes, three sets of the silicon “EarFills” earpieces, which come in small, medium and large. A quality carrying case is included with the headphones as well as a tool for cleaning the ear pieces when they start getting funky. 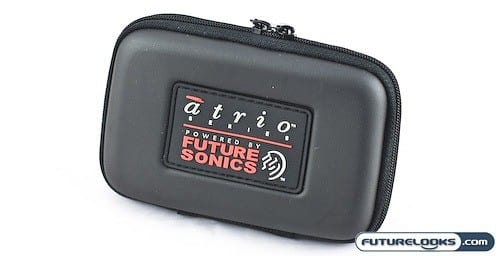 Although the case isn’t the most incognito thing in the world, it is functional and holds everything “Atrio” related in one place. It also provides a bit of crush resistance and who knows, maybe one of your favourite singers might strike up a conversation with you about them…or not.

A couple things that seemed missing, due to the Atrios travel/portable and professional/studio background was an airline adapter for those road trips and a 1/4″ adapter for those studio sessions. These two things would have really made the $199 US price tag a little easier to swallow, even though these two items are only a few dollars each at your local electronics store.