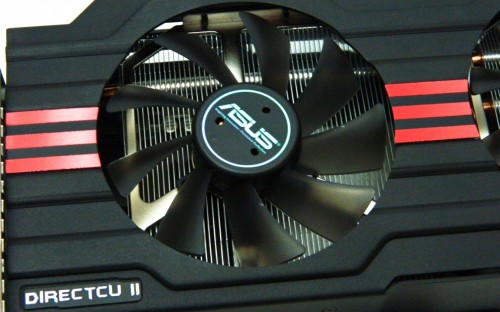 GPU heat is the by-product of any awesome gaming experience and managing it is a never ending task. ASUS’ DirectCU II series video cards feature an impressive custom designed cooler for this reason. It is a flagship among ASUS video cards that sport hand picked GPUs, enhanced voltage regulation management (VRM), and are assembled with their own unique higher quality components. But the question is, do all these enhancements make a truly a better graphics card? Will it really live up to strict gamer standards for heat management and for overclocking? We literally took the ASUS AMD HD 7970 DirectCU II video card a part in order to find out. 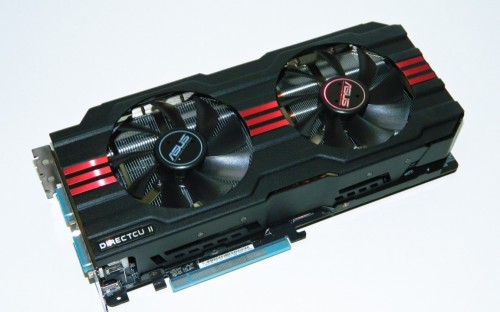 The ASUS HD7970-DC2-3GD5 offers all the AMD Radeon HD 7970 GPU features which include AMD Eyefinity technology for updated stereo 3D support and the ability to drive up to six displays. PCI Express 3.0 up to quad CrossFire, AMD App Acceleration for faster folding and mining, HDMI 4K support for greater than 1080p resolutions, and Powertune technology designed to dynamically optimize performance by controlling frequencies and thermal output round out the top end feature set. These features also play a large part in the AMD GHz Edition where GPU Boost automatically increases frequencies when the task demands it. 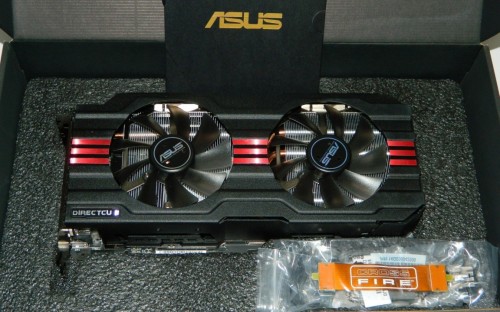 The card bundle is pretty slim probably to keep cost down. All the expense has been put in to engineering the card. Inside is a multi-language set up guide, software disc, CrossFire bridge, dual 6pin to 8pin adapter, VGA/DVI adapter, and a black heat sink for the VREG in case you strip down the card to attempt some record LN2 overclocking.

While it would be neat to get a new game title with these cards to sweeten the deal, it’s hard to satisfy all the fans out there with just a single title. 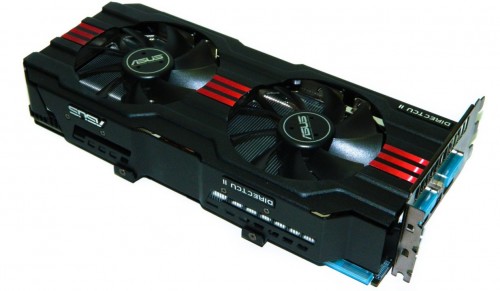 This card is impressive to look at especially if it matches a system design theme. It’s also heavier than many other cards due to the cooler’s extra thickness, full fan shroud, and the single black anodized brushed aluminum back plate to help prevent any flexing. That back plate actually came in handy preventing the card from making CPU cooler contact on some micro-ATX boards.

You no doubt noticed this card appears thicker than regular or reference cards. If you’re planning on running two of these cards in CrossFire mode, make sure your motherboard has at least two or more slots between PCIE slots. Despite size, the DirectCU II (DCUII) design continues to make ASUS’ cards one of the most highly coveted choices simply because it looks fast and beefy.

The DCUII consists of three major components all designed to dissipate heat and cool every aspect of the HD 7970 video card. The first level of attack is a thin black heat sink (with pink thermal pads) which covers the video memory, chokes, and MOSFETs. It’s connected to an aluminum-copper heat pipe combo heat sink. A small copper sub-plate that’s just slightly larger than the GPU itself transfers the heat to the heat pipes. One can’t help but wonder if a larger plate would help shave off a few degrees.

Finally, the black-red accented dual fan shroud finishes off the cooler. The dual 10cm fans are clear but do not light up during operation. These fans are designed to be 14dB quieter than reference fans and are probably rated to about 3000 RPMs suggesting it moves a considerable amount of air as well. The cooler is obviously designed to dissipate heat inside and outside the back at the same time. This should be a non-issue as long as you have decent air flow. If you don’t, you really need to check out our many case reviews.