Overclocking should be attempted at your own risk and poor ventilation, or just the misfortune of the OC spirits, could cost you your card. So, cool well and overclock wisely by getting to know your overclocking tools first.

OC Guru II is a step in the right direction for getting the very most out of your GIGABYTE video card. The main page has well labeled tiles with settings that can be typed in or adjusted with arrow buttons to manipulate frequencies and voltages. Just don’t forget to hit apply. The Online Support tile lets you update any of the software. Since cooling is essential for the life of your video card, users can manually adjust fan speed upwards. 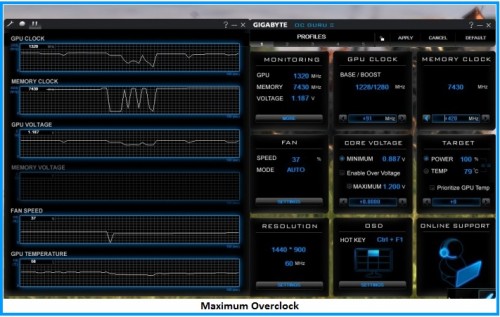 After familiarizing with OC Guru II, I ran Heaven 3.0 benchmark while slowly applying 25MHz at a time to the GPU till finding a max stable rendering. Next, I tried the same with memory. The GPU stability topped out at 1228MHz Base and 1280 Boost clock. The GDDR5 2GB memory randomly erred with more than 7430MHz. Overall, still a pretty nice overclock on top of the factory overclock. Fan noise was still very tolerable but we’ll get into that in a little bit. 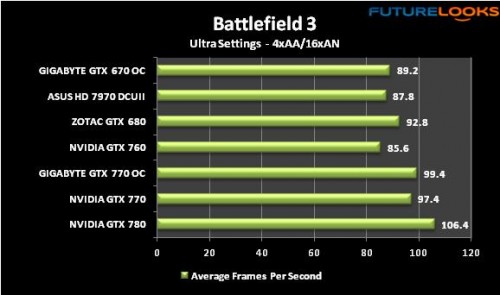 Starting off, the OC card has just a little more frequency to render another 2 frames. Yes, it’s safe to say that BF3 doesn’t really hurt these cards all that much. Battlefield 4 will be a different story though. 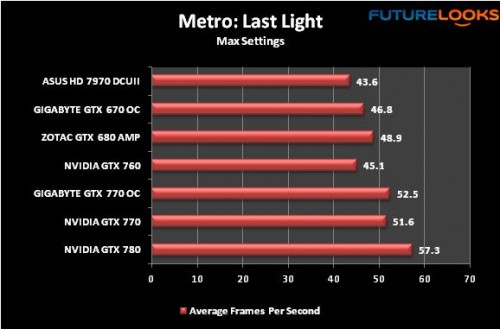 I’ve played through this game a bit. The max details tend to really beat on the GPU especially in areas where smoke, lighting, and physics are crammed in to the frame. Again, OC cards will tend to score just a bit higher. 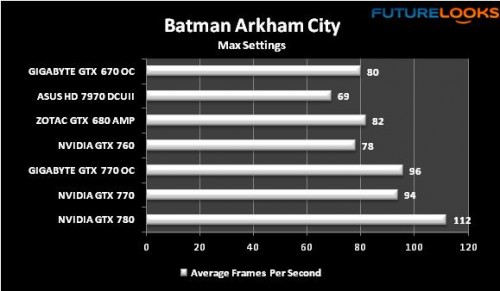 The super hero rendered game ended with the OC card scoring yet another couple frames more. This game sure looks good and very smooth when maxed out. The only thing that could make it better is NVision 2 on the ASUS 3D monitor. 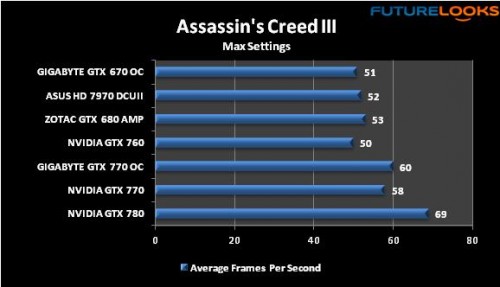 I’m surprised that AC3 hits the cards so hard. However, depth of field viewing really is highly detailed and contributes to the beating. At 60 fps, it’s smooth playing throughout. I kind of see a 2 frame trend with the OC card. 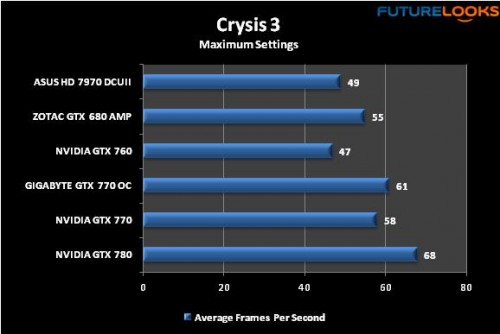 Similar to AC3, Crysis 3 is all about the mapping. My demo puts you in more areas where you need GPU power to render the action and not so much the map. Still, 61 frames is nothing to scoff at as it renders at least 3 frames more than the reference card. 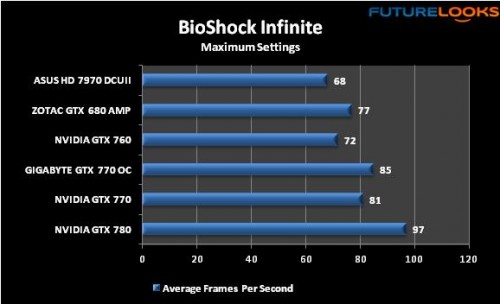 I decided to add Bioshock Infinite to the mix for the sheer disturbance of the maps. Even with the seemingly complex lighting and physics action, the GIGABYTE GTX 770 OC easily renders 4 to 5 frames more than the non-overclocked version.

Next, we’ll wrap up with the synthetic benchmarks, some thoughts on the cooling system and power consumption, and take it home!