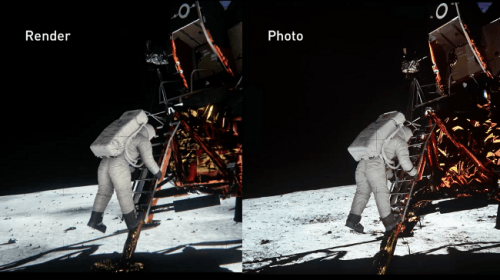 At NVIDIA’s GAME24 Event earlier this year, the company had a lot to celebrate. First off, it was the first event to bring the world together in 24 consecutive hours of gaming and PC DIY fun. Second, it marked the launch of their GTX 900 series GPUs. Finally, it allowed the company to show off their second generation Maxwell GPU architecture, by revealing a real time lighting demo of the first moon landing, 45 years ago.

On July 20th, 1969, the United States launched a mission to be the first to walk on the moon. Although their mission was heralded as a success, some people theorize, that the entire act was a hoax. From using paper cut outs, to alleging that NASA worked with Stanley Kubrick, the man behind 2001: Space Odyssey, the men and women with the tin foil hats, set out to disprove this historical achievement.

At the GAME24 event, NVIDIA stepped in, to provide support for the Moon landing. They took their Maxwell architecture, the Unreal Tournament 4 engine, and real time lighting technology by VXGI, to try prove once and for all, that the moon landing did indeed happen.

In case you missed it, here’s the demo, as it was shown, during the GAME24 event…

The NVIDIA Moon Landing demo used to provide proof positive, that the moon landing did indeed happen, is now available for public consumption. Yes, even the conspiracy theorists can download it, and play with it.  You can grab the direct download right here.