This is the point where things get a little confusing for us here at Futurelooks. The overall performance in nearly every category is average, with the exception of Stereo crosstalk and IMD + Noise. We would like to end the story here, but these results do not reflect the real world performance.

During testing we learned that the GIGABYTE G1.Sniper A88X does not like any audio at less than 24-bit. We could not complete tests at 16-bit as the distortion levels were out of control. The second thing to keep in mind is that while I do the tests in stereo, real world testing is done using a Logitech X series 5.1 surround sound system. When using the G1.Sniper A88X in day to day, the audio quality was noticeably clearer in every aspect. We are by no means audiophiles, but we do like a great audio experience, and the difference was as clear as night and day.

We did however have some initial problems with balance. The specs say the gain boost only applies to the front channel output which is not correct. I was forced to lower the bass of my speakers by quiet a bit when using the G1.Sniper A88X. We also had trouble with the bass being too pronounced in bass heavy action scenes in movies, that made it seem like the volume was suddenly increased by 100%. It was extremely difficult to find a middle ground with clear spoken dialogue and action scenes that didn’t have my downstairs neighbor complaining about the noise.

All is not lost though as we did finally get the software and hardware settings to suite needs for everything, in use in a variety of applications. Once everything was tweaked, the audio performance exhibited crystal clear treble and mids with punchy, distinct bass. It takes a little more work and time to get the G1.Sniper A88X audio to fit what you need, but it is worth the investment. This doesn’t even include what you can do by swapping out the Op-Amps, to further tweak your sound. It’s truly a great audio experience once setup.

This is one area that is often overlooked by many people when considering a new part for their system. In this test, we just want to give you an idea of the amount of power you can expect to use when your system is idle and at full load. Idle testing is done with the system on and unused long enough to switch to the AMD low power C states. Full load testing is done while in game with an average power consumption taken over a 5 minute period. 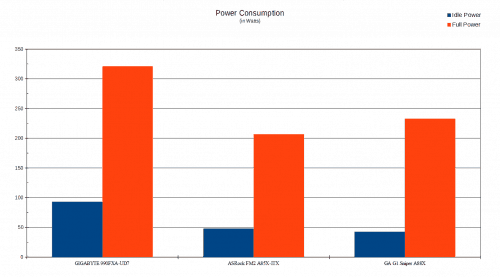 The GIGABYTE G1.Sniper A88X shows use some good and some bad here. It is good to see it manages to have the lowest power use of the three boards in the test when idle. If you are like us, your computer spends more time just sitting there than you believe. At full load on the other hand, the G1.Sniper A88X uses a little more power than its FM2 socket counterpart, but still well below the 990FXA-UD7 and FX-8350 CPU combo. This may be attributed to the enhanced audio section on the board, which is quite a bit more elaborate than the other two in this test. 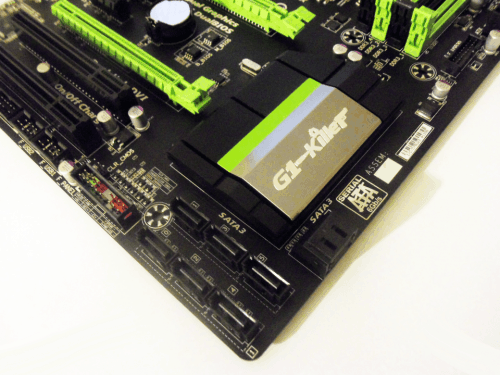 The GIGABYTE G1.Sniper A88X is a welcome addition to the AMD FM2+ lineup, but it’s not perfect. We were a little disappoint the premier feature of the G1.Sniper A88X, and that was the audio system. It was so difficult initially, to work with at first. But in the end, the audio output sets itself apart with crystal clear highs and mids, but is hurt itself with too much bass. We truly wished there was some way to turn off the boost for the center/sub channel. Take this with a grain of salt as the audio got a lot better once a lot of fine tuning was done. But still, we wished GIGABYTE would have some magical setting, that would give us balance, so we can start at that point, and tune to suit our needs.

The G1.Sniper A88X delivers in every other area in spades. It gives little to no ground in power consumption, gaming performance, or I/O performance when compared to the other motherboards, despite often being at a disadvantage. To put the cherry on top, the included software can be very useful in the right application, but we really wish they upgraded the experience to where their Intel based boards are, since the Intel Z87 launched. We really don’t have anything to truly bad to say other than we wish the second PCIe x16 slot ran at least x8 speed, but that’s a hardware level matter that is out of the control of everyone except AMD really.

The best part is this is clearly just the beginning for GIGABYTE as there is still plenty of room to expand with their rebranding in their new gaming series. In fact, they’re already part way there with a new “red and black” motif.

If you are looking for a solid, well crafted FM2+ motherboard with better than average audio, then look no further than the GIGABYTE G1.Sniper A88X. It is well worth the $104.99 price tag and you will not be disappointed in your investment. This board is HIGHLY recommended!