7-Zip’s benchmark compresses and decompressed blocks of data to calculate MIPS (Millions of Instructions Per Second). In this test RAM can have just as much an impact on performance since this data must be held in RAM so as not to choke the processor. The faster the CPU can get to the data, the faster it can process it. I did this test with a 32 MB dictionary (uses 1701 MB of RAM) and a 128 MB dictionary (uses 6181 MB of RAM). 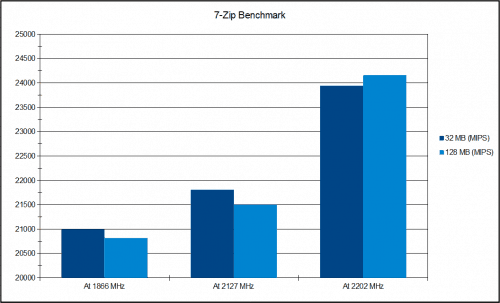 This test is a real world computational test. The actual converting process is a CPU intensive task, but the working data must be stored in RAM due to its size. The faster and more efficient the RAM is, the better your CPU can perform. 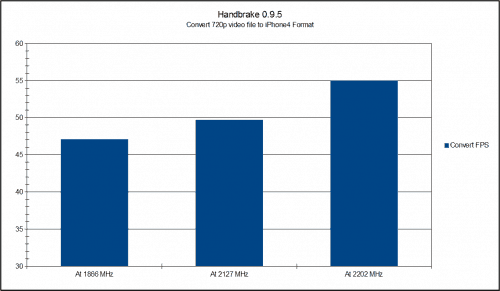 This test has a near linear progression. As RAM speed increases, the faster the file is converted to iPhone4 format. While the CPU is overclocked in the 2202 MHz setup, we know from Part 2 of the Bulldozer review at the 55 FPS seen here, it is slightly higher than the 54.5 FPS when the CPU alone was overclocked to 4.74 GHz. In this case, I can say you would benefit more from overclocking the bus and memory if you do a lot of video converting.

This test will be more focused on overall system responsiveness. Games use several different types of calculations, encryption schemes, and various sized data blocks. It is not as uniform as computational tasks. Memory still plays a very important role related to speed (MHz) and not its density (GB). 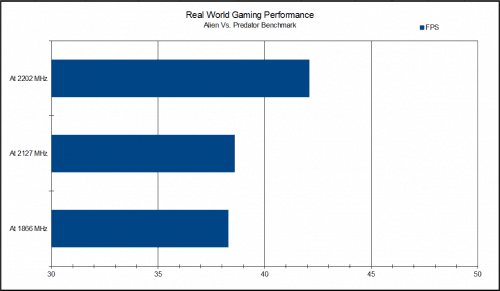 The first step up to 2127 MHz yields a 0.3 FPS increase, from 38.3 to 38.6 FPS. While the RAM is faster, the system is being held back by the Northbridge as the amount of data flowing between the memory and CPU is practically unchanged. Once I am forced to open up the Northbridge by 300 MHz when using the 236 MHz bus, we jump up to 42.1 FPS for a 3.8 FPS gain. While not a big gain I believe this limit is do to with the graphics card and not the memory or bus speeds choking the system. 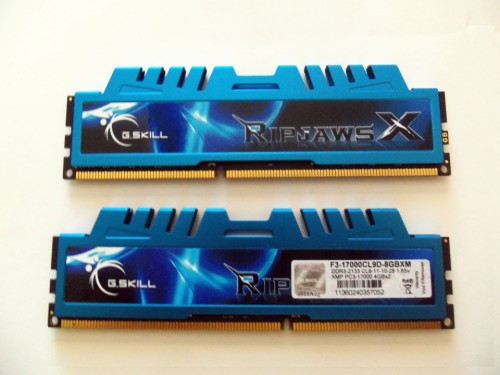 This set of G.Skill Ripjaws X is a very solid investment for any system being built. At a capacity of 8 GB and guaranteed to run at up to 2133 MHz (9-11-10-27), it provides a lot of flexibility. It is more than enough to run any game, minor video editing system, and has plenty of overclocking head room for those looking to start at 1600 MHz or 1866 MHz. On top of its versatility, the price of $79.99 makes it is one of the cheapest sets of RAM you can get at 2133 MHz with CAS 9 latency.

The only real weakness here is the lack of overclocking potential beyond the stock speed of 2133 MHz. If you have a motherboard with a 10.66 multiplier, using it will limit any bus overclocking you can do. You may end up running the RAM itself below its stock speed to achieve the bus speed or CPU speed you desire.

If you are looking for 8 GB of RAM to run at 1866 MHz or below, you are better off with something slower. If you plan on overclocking an AMD system via the bus speed for any reason, the premium over 1866 MHz RAM kits is worth it. Simply removing your RAM from any possible limitations can be a great help to the overall overclocking experience. With G.Skill’s standard lifetime warranty, I don’t see why this RAM would not be in your short list of considerations.