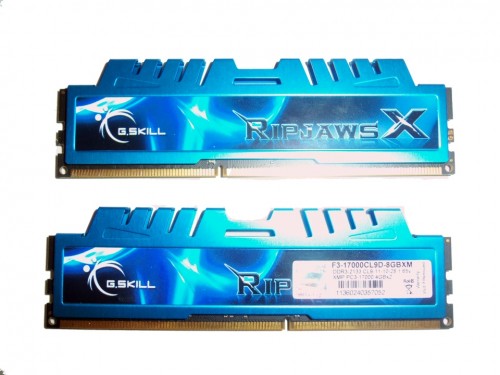 People often don’t realize that a PCs are built for a certain purpose. When it comes to the focus of a PC build, the items you tweak are always the graphics, CPU, storage, and memory. For example, a person who needs a PC for audio/video editing will need much more RAM than someone who is building gaming system. If you need more than the now standard 4 GB of RAM, then the G.Skill Ripjaws X DDR3 2133 MHz RAM may just be what you need and they come with a massive frequency boost over the run of the mill 1333 or 1600MHz modules. 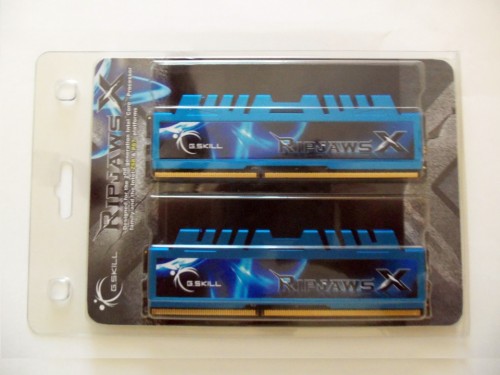 The G.Skill Ripjaws X DDR3 2133 MHz (9-11-10-27) RAM is your basic dual channel memory kit. It has a black PCB with colored heatspeaders which in my case were a nice powder blue. The standard speed of 2133 MHz is well beyond either AMD or Intel current standard memory speeds of 1866 Mhz and 1600 MHz respectively.

This set of G.Skill Ripjaws X were originally designed for a 2nd Generation Intel core Processor platform on the 1155 socket, but should work great in any system that supports DDR3 like AMD’s new Scorpius Platform which we’ll be conducting our tests on.

Our kits are available in Red, Blue or Black and retail for a fairly competitive $79.99 US with promos and rebates possibly taking that down even further. As with most standard memory kits, there is nothing extra in this package so we’ll skip straight to testing.

For testing, I decided to use the system that I put together for the AMD FX-8150 review. While not designed for an AMD system, I do not believe this will hinder my testing, and may reveal some things about the new architecture that we didn’t experience in the original review.

These test were much more focused than my previous motherboard reviews as RAM can only do one thing for your PC. As such I am using a smaller set software.

As there are next to no memory kits designed for an AMD system I was not afforded the luxury of memory profiles on the RAM. Also, the motherboard I am using, the GIGABYTE 990FXA-UD5, does not support memory speeds higher than 1866 MHz (9.33 multiplier) so I had to overclock the bus in order to get this memory to run at its stock speed. As such I am including the exact settings of the system for each RAM speed.

I did run into an issue when overclocking the bus to 236 MHz as my system would lock all the multipliers. I had the CPU multi set to x16.5, Northbridge at x10, and HT at x12 which should have yielded speeds much closer to my other tests. Even though this is how the BIOS was set, I have the above listed settings from a CPU multi of x18, Northbridge at x11, and HT at x13 once Windows 7 is booted. I attempted to change this several times, but was unable to use any lower multipliers once the bus is higher than 230 MHz.

I attempted to go beyond 2202 MHz by uping the voltages more and increasing the timing to 11-11-11-30, but there was no more to give. The issue seemed to be directly related to the RAM as my rig would POST and attempt to load Windows 7, but would blue screen the moment any data was loaded. 2200 MHz seems to be the limit from this particular setup. I am not sure if it is the board or the RAM holding it back, though I am inclined to believe it is the bus reaching its limit.

We will start this review with raw performance tests. Sandra 2011 SP5 provides a memory test that uses anywhere from 30% to 71% of the memory at around 10 different package sizes to calculate an aggregate score. 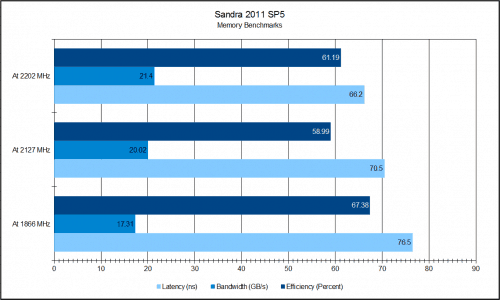 Going from my system’s maximum recommended memory speed of 1866 MHz to 2127 MHz provides improvements on both bandwidth and lowers latency. These gains are at the cost of efficiency which would mean there should be a little more to give at this speed. At 2202 MHz the RAM shows even more gains in every catagory and even improves efficiency over 2127 MHz; however, I think this has more to do with the 300 MHz plus Northbridge speed increase.

Now that we’ve gotten the general performance out of the way, let’s see how that translates to specific areas of performance.