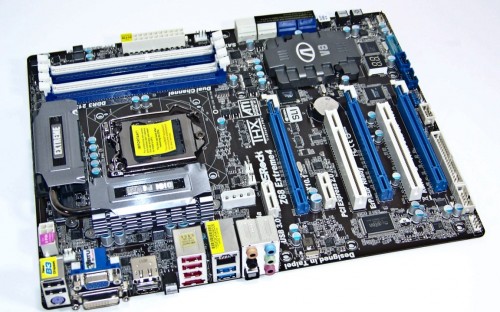 The ASRock Z68 Extreme 4 (AZE4) takes on a similar layout and look to its P67 cousin including its main features. Along with the UEFI BIOS and ASRock Extreme Tuning Utility (AXTU), you can listen to music through your player via the system even when the system is off via the On/Off Play feature. Our unboxing video will cover some other details. Check it out below!

In my opinion, the Combo Cooler Option is slowly becoming antiquated. Not many people still have LGA 775 socket friendly CPU coolers still lying around. You’ll be fine if you do, but it would really be something special if we could some how use an LGA 1336 socket only CPU cooler as well. If you have a Noctua CPU cooler, you’re covered. They’ll send you any upgrade mounting kit free as we found out at COMPUTEX 2011 this year. 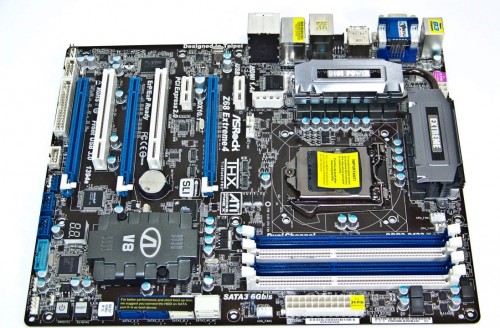 Of all the boards in the round up, the AZE4 is the only board to implement a PLX PEX8608 chip. This chip helps keep all the expansion slots and ports run at their full PCI-E speed at x1 while the rest of the platforms in the round up lose function to some of those. This is a big deal if you’re a user with dual video cards and need the function of all those other ports. A good example would be discrete audio or gaming network adapter. It’s hard to believe all of this costs a mere $169.99 US MSRP from the usual places. 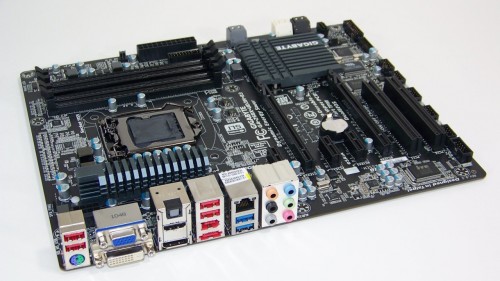 This is currently GIGABYTE’s flagship Virtu capable motherboard. It’s basically a lot like the UD4 model but with video out ports. Their all new Touch Hybrid BIOS brings tweaking the system to the Windows environment. This board also includes EZ Smart Response to quickly set up Intel Smart Response Technology without entering the BIOS or reinstalling your software. Have a peek at this jet black beauty in our unboxing video below.

While it may not boast an aggressive overclocking look, the board uses an Intel approved Intersil PWM controller which is VRD 12 compliant. That helps provide the CPU with much needed clean power. If you have some Kingston HyperX Genesis 2133MHz with XMP features or another brand of high frequency memory, it will easily run it.  The board bundles their Smart 6 software which includes QuickBoot (decreases boot times), QuickBoost (one click overclocking), Recovery 2 (retrieve lost files), DualBIOS, Recorder (system watch dog), and TimeLock (timer for locking up your PC). 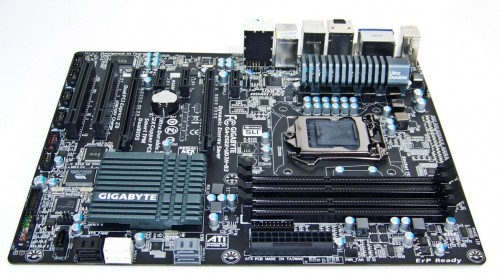 In terms of layout and design, this is a very low profile platform in that there are no components that stand tall aside from the PWM heat sink next to the CPU socket. It’s very clean with all of the major power sockets expansion ports, panel headers, and SATA. Again, the only the proprietary USB bracket port finds an odd spot between the 24-pin power connector and DIMM slots. For $159.99 US MSRP, you’ll find this the most affordable SLI/CrossfireX motherboard that comes with GIGABYTE’s overclocking heritage.