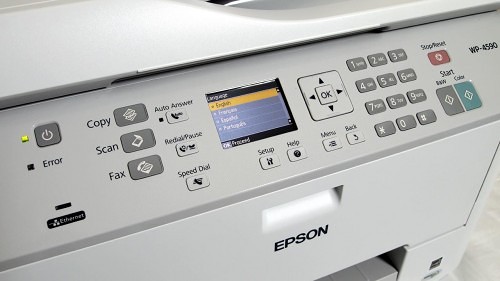 There are several competing products on the market that have made the leap to touchscreens. We see a 7-inch touchscreen display on the Samsung SCX-5935FN, for example. The 2.5-inch display of the WP-4590 not only feel comparatively smaller, the lack of touchscreen capabilities makes it feel somewhat dated.

Even so, everything is laid out in a reasonably simple and understand manner. There are three grey buttons for three main functions–copy, scan and fax–and a standard five-way navigator to the right of the display. You also get a numeric keypad, dedicated buttons for your choice of color copy or black and white copy, as well as buttons for menu, setup, help, stop, redial, and so forth. It’s definitely button-heavy, but that’s in line with the business-minded focus.

There are some strange quirks in there, though. For instance, if you get into the setup menu, you can’t hit back, setup, or stop/reset to get back out of it. Coming from an increasingly smartphone and tablet-minded customer base, this just doesn’t make sense. You get out by pressing the copy, scan or fax buttons. It’s a minor quibble, but it can be an irritating one. 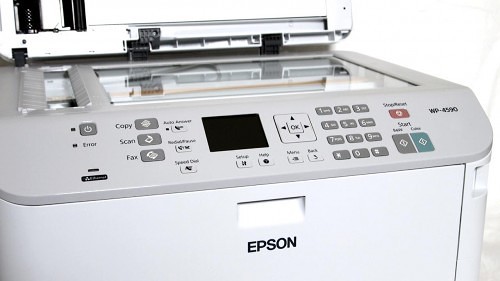 A scanned image or document can either be saved to a USB device or it can be sent to a connected computer. Opting for the latter, you have the choice of an image, a PDF, or an email message. With the copier function, you get duplexing choices, quality settings, density settings, collating options, reduction and enlargement, and so on. This is all par for the course.

But how fast can it do this and how is the quality? When I used the automatic document feeder at the top for a single black and white copy of a single sheet of printed text, the total time from the moment I pressed the button to when I had the copy in my hand was 19 seconds. Much of this was the “startup” time that it took before the WP-4590 even started feeding the source document.

As far as copy quality, I used the flatbed scanner for an 8×10 photo that I took. The resulting color copy was usable, but it was far from ideal. Granted, I used plain paper, but the colors were dramatically muted, lacking in saturation. The contrast appeared to be dialed up too. As a result, a fair bit of detail was lost in the shadows. I also found that what appeared more as a greyish-purple (a t-shirt) in the original came out as flat grey in the copy. 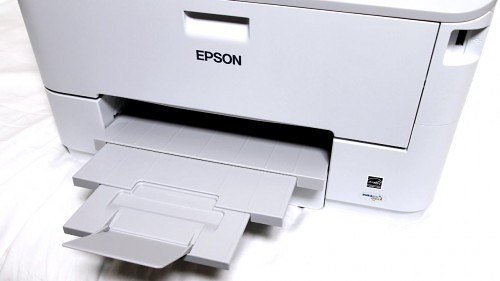 To test the regular printing speed of a black and white text document sent from the PC to the printer, I sent a job with 10 pages of regular text. I opted for the normal level of quality and requested two-sided printing (5 sheets of paper). Not all the pages were completely filled with text, representing what you might get from a business document or e-book.

Under these circumstances, the time it took from when I clicked print to when I had the completed project in hand was 73 seconds. This meant that each side of printing averaged about 7.3 seconds, working out to just a little over 8ppm. Epson officially rated the printer at 9.2 ISO ppm in black for two-sided printing, so that’s not that far off. Indeed, it took about 14 seconds before any actual printing began.

Not surprisingly, the perceived quality of a black and white document was above that of the color photo print described earlier. That said, the text still didn’t appear to have the same level of “crispness” that you’d get from an equivalent laser printer. It’s still perfectly adequate and will do the job, but it may not satisfy the perfectionist. 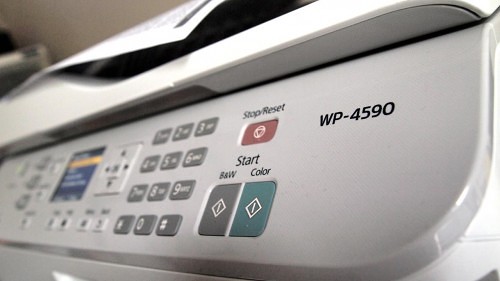 No, the Epson WorkForce Pro WP-4590 certainly doesn’t have the flashy design that you get with something like the Samsung SCX-4500. It’s a rather generic beige box that simply gets the job done and I think that really was the only goal that Epson was trying to achieve with this product.

Even though it is “just” an inkjet multifunction printer, the WP-4590 is able to compete against entry-level multifunction lasers, especially since a color laser can cost you considerably more money with similar features. The print speed is perfectly adequate and the built-in networking is a plus. I would have liked better print quality for pictures and the lack of Wi-Fi is a real shame. I also found it be comparatively bulky and heavy next to smaller inkjet MFPs.

Unlike many other inkjets though, the ink doesn’t appear to smear nearly as easily, drying a fair bit more quickly. It’s also nice to see relatively low operating costs, somewhat assisted by the ability to purchase different sized cartridges to save money on seldom used colors. Based on Epson’s numbers, a single black and white page is only going to cost you about 1.6 cents, whereas a color page is a mere 6.8 cents. It also supports PCL and PostScript, as well as mobile printing, in case any of those interest you.

All said, you get a reasonably affordable MFP hardware that will be a good fit for many small offices for about $499 US MSRP. Supplies seem affordable as well with black cartridges ranging from $38.49 US (XL) to $52.99 US for the XXL. Color cartridges also come in two sizes from $24.49  – $58.99 US and allow you to replace seldom used ones at a lower cost.