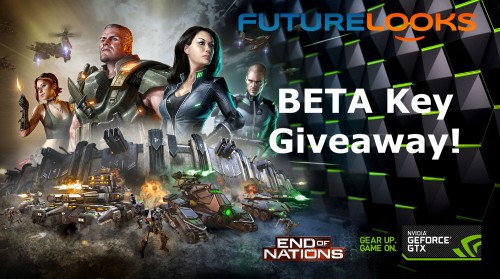 If you’re waiting to get your first taste of End of Nations from Trion Worlds, the wait is finally over.  Your chance to wage sprawling 56-player battles in this year’s most anticipated MMO real-time strategy game is close at hand. In just a week and a half away, you’ll be able to play it in a special closed BETA weekend on (Click Here for an Update). The only catch is you’ll need a BETA key to join in on the fun. That’s why Futurelooks has teamed up with NVIDIA to make sure that we get as many of our lucky readers as possible, into this special invitation only event.

Here’s how we’ll be giving away the FREE BETA keys to this exclusive event!

Twitter – We’ll be giving away BETA keys all week long on our Twitter Account. Just follow @futurelooks and keep an eye on our tweets as we’ll be dropping keys three at a time all week until we run out. Just tweet us back when you hear us asking if anyone wants keys and we’ll provide the goods. Tweeting and Retweeting is encouraged because that’s how you’ll get our attention. But what if you’re not a Tweeter?

Facebook – The “Social Network” is where we’ll be dropping more keys like it’s hot. Make sure you LIKE our Facebook Page and SUBSCRIBE to our updates so that you’ll find out EXACTLY when those keys hit our status updates. Like on Twitter, we’ll be giving away three of them at a time so make sure you let us know that you want them when we ask. Sharing our status updates and maybe the link to this contest might gets our attention too.

Finally, if you’re not social at all, we’ll be giving away a few keys here as well. Just comment on this post and we’ll drop a few of them every day if you ask REAL NICE. And I mean REALLY nice because we really wanted to make it a Facebook/Twitter thing. But we’ll drag our asses back here if we’re liking the comments.

Since NVIDIA hooked us up so we could hook you up, make sure you gear up with the ultimate weapon—an NVIDIA® GeForce® GTX graphics card—then keep an eye on our Twitter, Facebook and this post right here, for a chance to snag one of these FREE BETA keys for one of my personal favourite games of the year.

We’ll be giving these away until we run out so make sure you snag them while we’ve got them. There probably won’t be any more once we give them all away so consider this one of those “while quantities last” give aways and of course, make sure you get one by following all the stuff we talked about above. Good luck!