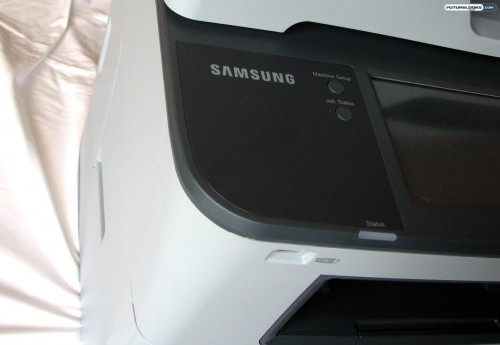 I’m all for convergence and efficiency. Why would you bother have several separate devices, each of which serving just a single purpose, when you can have one unified machine to handle them all. That’s the brunt of the argument behind multifunction printers and the purpose for the Samsung SCX-5935FN. This network-ready monochrome laser multifunction printer is clearly targeted at the business market. It may not be pretty, but it does the job. How well? Let’s find out!

The Samsung SCX-5935FN may not be powerful enough for a large office, but it’s perfectly suitable for a small business or a home office. Since it is a little on the bigger side of things, I wouldn’t suggest stuffing it into cramped quarters, but a regular sized room should be a good fit. 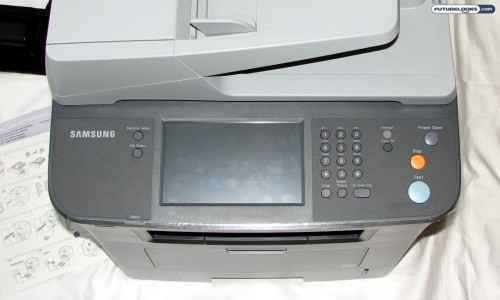 The key selling point with this multifunction printer is its utility. Samsung stuck with a more subdued grey appearance for this MFP and it doesn’t even do color. It is “just” a monochrome printer, but it comes with scan, copy, and fax functionality too. Samsung also claims that it has the highest maximum monthly duty and the lowest cost per print.

Among the highlights are its high level of output, large paper tray (up to 1,050 sheets), expandable RAM, integrated hard drive, OCR processing, networking capabilities (including FTP and email), USB port, and a seven-inch color LCD touchscreen. There’s no Wi-Fi, but there is a standard Ethernet jack for connecting to your network. 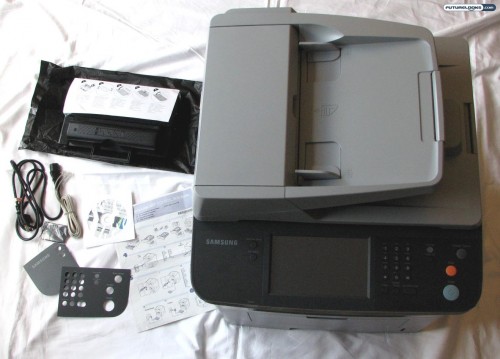 The accessories that come bundled with this multifunction printer are pretty much par for the course. You don’t get the first ream of paper or anything like that, but you do get the pricier first cartridge of laser toner. The first toner is typically a capacity crippled version that gets you far fewer pages than the retail versions. It does get you started and ensuring that this is the printer for you.

As for the rest of the accessories, you also get some phone cable for the fax function, but there does not appear to be any RJ45 cable included for the networking functionality. That’s not a huge deal, since the cable is usually pretty cheap or you might already have one in the junk drawer at the office. The power cable is naturally included in there as well.

Along with the software CD and quick start guide, there are finally two overlays that can be used on the main control panel. That’s to provide French text for all the francophones in the audience. 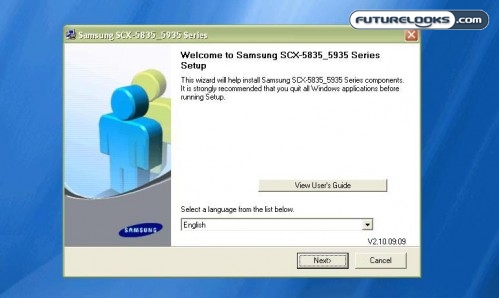 Sure, you could use the Samsung SCX-5935FN as a regular USB printer physically connected to your primary computer, but that wouldn’t make use of its important networking functions. It’s much better having the printer connected to your network router instead. Then that way you can be anywhere in the office and print like a ninja.

Overall, the setup process is relatively painless with the provided installation CD, but it would have been easier if you could simply add the printer using the default Windows utility. You’ll also find that the CD will automatically install extra software that you may or may not need, so it may be worthwhile to take the “custom” install path rather than the “recommended” one. Then that way you can select the features that are most important for you and your environment.