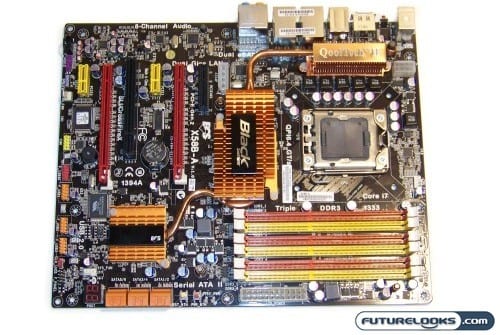 ECS’ new look is nothing like it was five years ago. Their themes were anything but cool with its mismatched and odd pastel colors. The Black Series theme continues to give ECS an image that has done pretty well especially amongst gamers on a budget. The color scheme really does do a pretty decent job of getting your attention with eye-popping, enthusiast level colors from the DIMM Slots and USB headers to the heat sinks.

Being a budget enthusiast’s platform doesn’t mean skimping out on components. You can see that the motherboard continues to offer solid state capacitors and the more stout Ferrite Chokes especially around the CPU socket. Keeping the components up to date has really continued to give the motherboard industry a more stream lined look and a far less cluttered appearance. 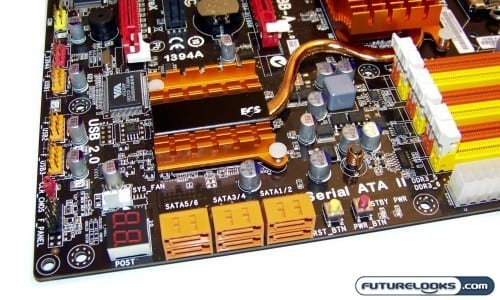 After looking over the motherboard thoroughly, there were no minor or major design issues. Engineers broke down and used horizontal SATA ports which eleminates any cable or device connectivity issues. They even put the battery between the first PCI Express x16 slot and PCI slot. Also, the auxiliary graphics 4pin molex header appears to be in an equally prudent spot out of the way.

The Realtek 8-Channel audio is a basic standard these days. While you may not always put the HD feature to use, you can find the five common audio jacks and an optical out port when you do. Sometimes, I wonder what it would take for a motherboard to consider using something like ASUS did with Creative’s X-Fi. Something like C-Media’s Oxygen Codec would be a nice update too. 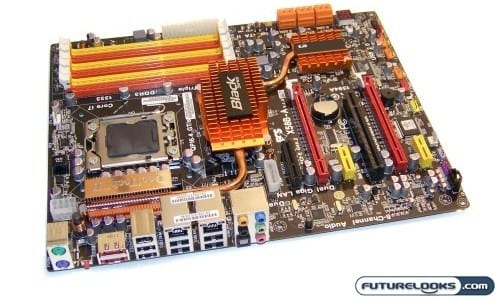 Spinning the board around, you can see all of the default connectivity options. It’s nice to see a dual eSATA port since this is fast becoming a standard on many a desktop system. You’ll also find six physical USB 2.0 ports which might be a limitation for some folks that adorn themselves with USB peripherals. However, there is also the PCI Bracket which puts the onboard USB 2.0 headers to work in the event you need more. And that doesn’t take in to account any of the USB ports your case offers once the system is built.

With as little fuss as possible, the ECS Black Series X58B-A was paired up with some of the finest (if not the finest) computer hardware presently available on the planet. Assembly was just about as easy as pressing the power button. Another freshly configured Vista 64 bit operating system was tossed onto a Kingston V-Series 128GB SSD hard drive.

Here are the rest of the test system’s specs including some of our comparison hardware:

The boards we compared against included the:

As is standard practice, all the latest BIOS, motherboard and graphics cards drivers were installed.

Once the system was up and running, I took a quick look at the M.I.B. BIOS. Just looking at it won’t put it to the test, but it also is responsible for the platform working together with all the system components. Aside from the common sensibly laid out tabs, the M.I.B. page contains any of the settings required for injecting a heavy does of overclock. The BIOS is ultimately the deciding factor in just how well a system overclocks and we’ll be looking at that a little later.