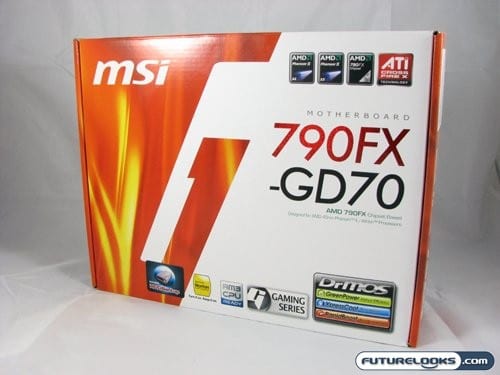 So far we’ve reviewed two 790FX based motherboards for the AMD platform: one from GIGABYTE and the other from ASUS. They were both decent performers, with the GIGABYTE board edging out the ASUS and finding a home in my AMD test rig. However all this commotion lead to an email from MSI, saying “Hey! What about our board?” Though it doesn’t really come as much of a surprise, it turns out that they have a very competitive AMD 790FX based board as well.

The MSI 790FX-GD70 offers some of the same features as the GIGABYTE (GA-MA790FXT-UD5P) and ASUS (M4A79T Deluxe) boards we previously reviewed. The catch is that it offers these features at a slightly lower price than those aforementioned motherboard manufacturers. Will this provide a good value to those loyal to or looking to jump onto the AMD platform? We’ll have to find out. 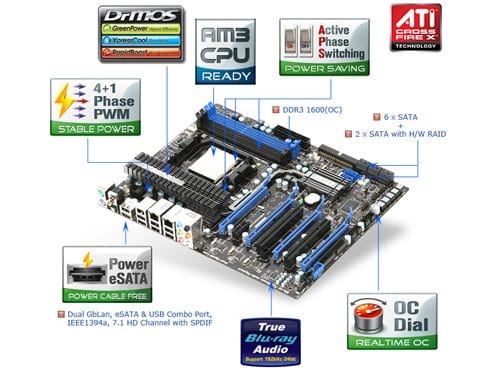 Like the two AMD based motherboards we recently reviewed, the MSI 790FX-GD70 has at its heart an AMD 790FX chipset. That means that this board supports the entire Phenom II processor line currently available on the AM3 socket. The board also supports DDR3 memory up to PC3-1066 speeds. Full CrossfireX support is also available.

Now the features we just mentioned are fairly standard faire for a motherboard nipping at the heels of the top end bracket. MSI separates itself from the rest of the pack with some of the interesting features found onboard. These features include real-time overclocking in the form of a little dial, DrMOS green power management, APS Power Saving and control, and True Blu-ray Audio. More features and specifications can be found on the product home page.

When it comes to pricing for the MSI 790FX-GD70, it tends to land on the cheaper end of the spectrum. Average retail prices for this board tend to be from a few to ten dollars cheaper than the ASUS and GIGABYTE boards we’ve previously reviewed. Seems like a great deal, but one is left wondering if you’re sacrificing performance for value. Once we take a closer look at the board, we’ll dive right into the benchmarks.

A Copious Collection of Cables and Connectors 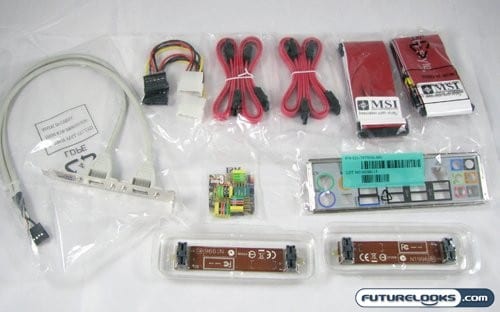 MSI includes a complete selection of cables and connectors with the 790FX-GD70 motherboard. Most of it is standard faire, but there are a couple unique extras found here in the form of the MSI M-connectors. Similar to the ASUS Q-connector, these little blocks allow you to easily plug in your front panel, FireWire, and USB headers without having to fiddle endlessly with tiny cables. Also included are two CrossFire bridge cables, should you wish to dabble in some dual video card action. The package is rounded of by two Molex-to-SATA power adapters, SATA cables, ATX backplane, USB headers, and two ribbon cables in standard MSI red.