Despite the current state of the economy, there are companies still making progress. They know when and how to make the changes necessary to benefit themselves in the long run. Regardless of what today’s news outlets are saying, the hungriest of self motivators and innovators tend to survive these kinds of times. Intel is just such a company filled with this kind of thinking.

A good case in point is Intel’s decision to invest $7 Billion in their U.S. Facilities (while other companies are closing down their facilities) over the next two years which incidentally follows Intel’s development model as they design and release a new micro architecture. All in all, this is just smart business. Their investment should stretch much further and accomplish more today as cost costs are lower than two years ago. Perhaps this aided Intel in their decision to drop two i7 processors from the roadmap slated for the Mainstream desktop line: Havendale and Aurburndale.

With a bit of fat cut away, Intel has decided to take a more aggressive step forward and proceed with their processor evolution. We think it was the right move and now we present to you, Intel’s roadmap for at least the next while. 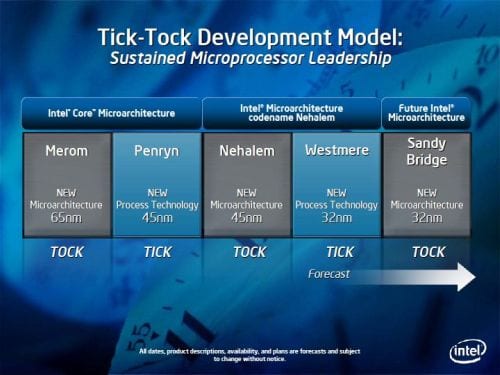 Intel’s latest roadmap reveals future Westmere and Sandy Bridge Processors. Cutting through the technical speak, Westmere improves upon the powerful 45nm process Nehalem Microarchitecture found inside the current i7 Bloomfield processors. Westmere will receive a 32nm die shrink which will help improve power consumption and lower thermal properties. This shrink should be highly anticipated by enthusiasts as both of these characteristics are ideal for overclocking.

If you think dual and quad core CPU’s were something special, think again… 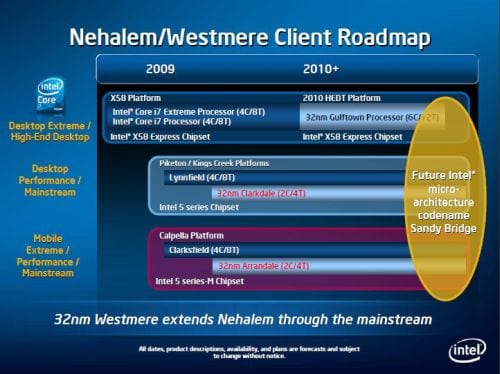 The current Extreme i7 series will soon include a more powerful 6 Core/12 Thread Gulftown processor built on the 32nm Westmere architecture.  The Mainstream desktop will receive the new 4 Core/8 Thread (45nm Socket 1156) Lynnfield processor supported by a new P55 Chipset platform and a 2 Core/4 Thread (32nm Socket M) Clarkdale. This will also include an on-die integrated graphics supported by a new chipset.