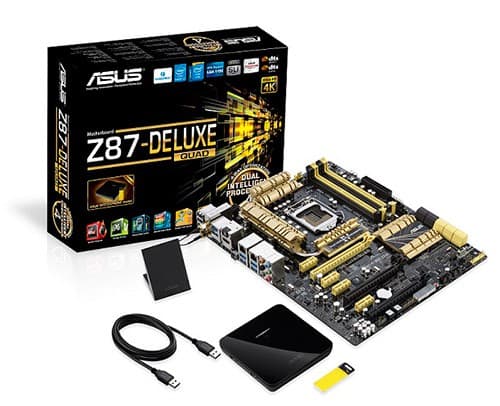 The 4K resolution boom is fast approaching and current technology is simply not ready for it. You already see half attempts at using 4k resolution in “IMAX” theaters that use standard sized movie screens to improve clarity. The PC market is always prepared and is three steps ahead of the game. The new ASUS Z87-Deluxe/Quad are now certified with Intel Thunderbolt 2 and I will explain how the two relate.

The Thunderbolt 2 spec is not physically different from the original, but utilizes resources better. The original Thunderbolt has 4 channels (2 up and 2 down) that could carry 10 Gbit/s each independently. The new Thunderbolt uses these in pairs for 20 Gbit/s and makes them bi-directional. That gives these ASUS boards the ability to stream 4k resolution content to up to three 4k UHD displays.

This is just the beginning with the ASUS Z87-Deluxe/Quad. Not only does it have two Thunderbolt 2 ports (supports daisy chaining, DisplayPort 1.2), but comes with some great new features including NFC Express, NFC Remote, Wi-Fi GO!, and Dual Intelligent Processors 4 for easy tuning.

There is currently no price listed for the Z87-Deluxe/Quad, but I am sure it will not be two far north of the current Deluxe/Dual at $314.99.

August 19, 2013 – ASUS is excited to announce the world’s first motherboard certified by Intel® with Thunderbolt™ 2 technology, the Z87-Deluxe/Quad. Based on the new Intel Z87 chipset and ready for the latest 4th generation Intel Core™ processors, the ASUS Z87-Deluxe/Quad ATX motherboard has two Thunderbolt 2 ports which allow for up to 12 simultaneously connected devices. Each port is capable of up to a 20Gbit/s transfer rate and is backward compatible with first generation Thunderbolt.

“Z87-Deluxe/Quad has been subjected to a tremendous amount of compatibility, BIOS, as well as video/audio and other tests to verify its quality and design,” said Joe Hsieh, ASUS Corporate Vice President and General Manager of the Motherboard and Desktop System Business Unit. “Being the world’s first certified motherboard for Thunderbolt 2 technology also means setting the standard for all of the upcoming products, which is something that ASUS has always done.”

The first generation Thunderbolt standard has four separate transfer channels — two upstream and two downstream — with a maximum transfer rate of 10Gbit/s per channel. Thunderbolt 2 combines these four channels into two 20Gbit/s bi-directional channels, providing 4X the bandwidth of USB 3.0. Together with DisplayPort 1.2 support, Thunderbolt 2 enables simultaneous delivery of extremely high-resolution video to the latest 4K/2K (4096 x 2160 and 3840 x 2160) displays while still offering communication with other bandwidth-hungry devices such as hard drives. Additionally, the ASUS Z87-Deluxe/Quad’s onboard HDMI port means that it can drive a total of three 4K UHD displays at once.

Thunderbolt 2 also supports daisy-chained connections with up to six devices on each port. With two Thunderbolt 2 ports, the ASUS Z87-Deluxe/Quad can connect to up to 12 devices at once, reducing the need for separate hubs and helping to maintain a clutter-free workspace.

The ASUS Z87-Deluxe/Quad includes a number of exclusive ASUS technologies. Dual Intelligent Processors 4 with 4-Way Optimization is an easy-to-use tuning tool that dynamically adjusts performance and cooling for reduced noise and increased efficiency with a single click. The UEFI BIOS presents a friendly graphical interface, making it easier than ever to set up shortcuts and favorites for quick access to the options that are used most often.

The ASUS Z87-Deluxe/Quad also includes the NFC Express accessory, which can automate common PC tasks simply by tapping the supplied NFC tag or NFC-compatible smart devices to the box. NFC Express can be used to securely login to your Windows user account without the need to type in a password, and also provides the ability to launch multiple applications to create a particular workflow. Using the free Wi-Fi GO! & NFC Remote companion apps for NFC-compatible smart devices, users can also wirelessly synchronize photos and videos with their PC and remotely control their system by tapping the NFC Express box.

*Specifications and product availability are all subject to change without notice and may differ from country to country. Actual performance may vary depending on applications, usage, environment and other factors.

Full specifications are available at www.asus.com