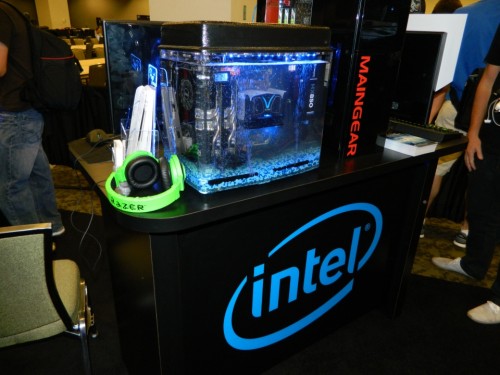 PAX Prime 2013 is not typically a show for computer related product launches. That’s why this year’s show was such a treat because not only did we get to see the launch of the highly anticipated Cooler Master HAF Stacker, but we also witnessed the first ever public exhibition of INTEL’s SSD overclocking technology. Justin Whitney and the Intel SSD “Uber” Marketing team gave us the opportuntity to learn how to overclock an Intel SSD. And then throughout the weekend, let gamers give it a shot too.

Although this sounds downright dangerous to DATA integrity, it can be done safely if it’s the right SSD and if it’s using Intel’s Xtreme Tuning Utility (XTU) which also, coincidentally, is capable of overclocking processors too. In our demonstration, we overclocked an Intel SSD to see if it really works at increasing bandwidth.

Like a regular computer system, the XTU software allows you to overclock both the NAND and controller independently. It’s surprisingly easy to do. Keep in mind that not all SSDs will support overclocking and that this is till very much something that is in a limited BETA.

Performance Improvements for Both Gamers and Professionals? 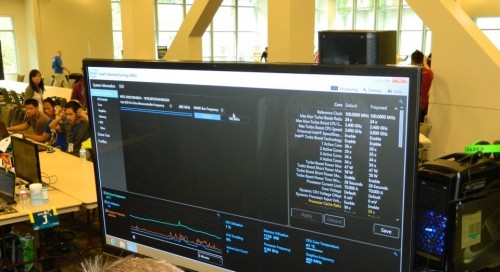 More SSD transfer bandwidth means quicker boot times, faster program execution, and faster response to requests. In other words, gamers will load in to games faster and desktop applications will execute quicker. We overclocked several different systems’ SSDs and here’s a closer look at the results of the test system featured in the system above. 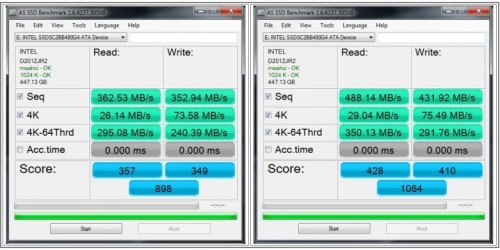 As you can see, the final result of overclocking both the flash memory and the controller made some significant differences to performance. Where we saw the largest gains were in sequential read/write speeds as well as performance in 4K-64Thread tests. There was also some performance increase in 4K data block read results which makes up the bulk of the speed that users experience in Windows. The gains in performance should compliment overall system performance.

What’s the Downside to Overclocking SSDs?

We naturally wondered is this a reliable, safe feature to build in to SSDs. The three different systems we tried never crashed or encountered problems. But we really only got a short test of something that should be tested a bit longer to see if there are any long term downsides.

We asked Intel if wear leveling would really be an issue. These are apparently relatively “safe” supported overclocking frequencies somewhat like the same concept with K-SKU processors which do well up to certain levels without issue. We also asked why not just sell stock and “Extreme” models as an Extreme SSD could offer more than just overclocking. It could actually be enhanced cosmetically as well to differentiate the two products. But again, only time will tell if longevity will be compromised by pushing performance outside of the normal range.

Unfortunately, we were unable to obtain any pricing possibilities but suspect that it will cost around 10% more than the regular parts. Just like how INTEL prices its K-SKU processors. If nothing else, the improved bandwidth performance is something any enthusiast that already owns an SSD could appreciate. Especially if it looks really cool too.

What are your thoughts on INTEL SSD Overclocking Technology? Do you think it’ll come to market? Or do you think it’s too dangerous to put into something that holds all your stuff?