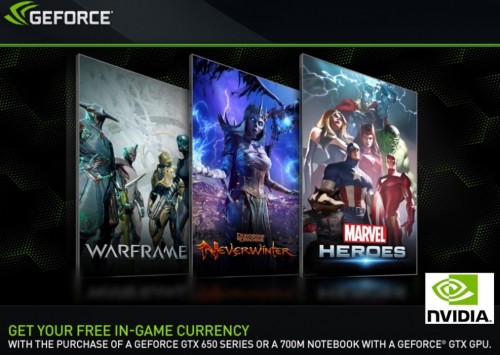 Not long ago, the moniker “Free to Play” or “F2P” was a burden to overcome by publishers as they struggled to prove themselves against more “worthy” games. Slowly this has changed with the adoption of new monetary systems in game rather than up front costs to the end-user. NVIDIA looks to further support this practice by announcing their plans to help end-users purchasing a new graphics card, a boost in three of the most popular F2P games on the market, announced this past weekend at PAX Prime 2013.

With the purchase of your next graphics card (700M or GTX 650 or better), you can get up to $75 to kit start your campaign. First you have the game voted best Free 2 Play game at PAX East 2013, Warframe. The Co-op third-person action game is powered by Nvidia PhysX and has over 3 million registered users. Now to pair with your PhysX enabled system, you get $25 of in-game currency to power up your Warframe.

Next is something a little more traditional in Dungeons and Dragons Neverwinter . This traditional MMO is a fast paced game with plenty of loot and lore from the D&D universe. The game is enhanced by NVIDIA exclusive technologies like 3D Vision and TXAA to enhance the visuals in your epic journey. To help you get started, NVIDIA has another $25 worth of in-game currency to either customize your character or deck them out in the best gear.

Finally to round out the bundle, we have Marvel Heroes. You can join the community of 1.5 million users and growing or unlock new items for your current game. This will allow you to unlock iconic characters like Wolverine, Spiderman, Thor, etc. and iconic costumes from the Marvel Universe.

You may argue that you would rather have a free game; however, which are you going to remember more fondly? A game you got because you spend $250+ on your graphics card. Or the powerful items, characters, and armor you will use for the next few months dominating a game thanks to free in-game currency. Full press release is posted below.

August 30, 2013— NVIDIA today announced a new promotion that will give gamers a total of $75 of in-game currencies to a trio of the hottest free-to-play games: Warframe, Neverwinter and Marvel Heroes. The promotion, which is applicable for new purchases of notebook PCs featuring GeForce 700M-series GPUs or desktop GeForce GTX 650 GPUs, starts today and will run throughout the rest of the year.

Voted the best F2P game at PAX East 2013, Warframe is a co-op third-person online action game set in an evolving sci-fi world. Featuring the incredible NVIDIA PhysX technology, players control ancient warriors in a war with the Grineer (bad guys). With over three million registered users, gamers can join friends in player-vs-enemy raids across the solar system and master the power of the Warframes. $25 of in-game currency gives players the opportunity to shop in the marketplace and gain new gear quickly such as a new supercharged Warframe with an inventory slot, a sentinel pet to aid in battle, mod-packs to instantly upgrade gear, void key packs to gain access to rare missions, as well as other boosters or revives.

For any fans of the Marvel universe, Marvel Heroes is not to be missed! This F2P massively multi-player online action role-playing game features frenetic action combat where players can battle infamous Marvel villains as their favorite Superhero. Play with the already one and a half million registered users, as Hawkeye, Storm, Daredevil, Thing, or Scarlet Witch. $25 of in-game currency gives players the option to choose from a variety of heroes including Iron Man, Hulk, Thor, Captain America, Spider-Man, and Wolverine to name a few. Players can also opt to get iconic costumes from throughout Marvel’s storied history, such as Iron Man’s Mk 1 armor from his first appearance in Tales of Suspense #39 to his Avengers movie armor, to further customize their hero.