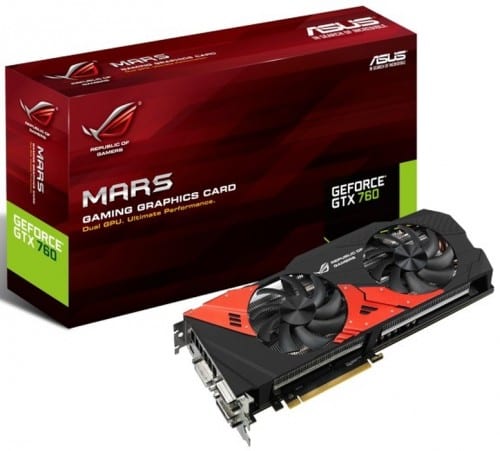 We all know about the standard line of graphics cards. It starts with your entry-level card and levels up until you have the flagship graphics card. And the levels are dictated by which GPU is onboard. Then we get the dual GPU graphics cards as the cherry on top, which are usually, based on reference designs. However, ASUS has done something that technically has no reference design. What they’ve done is taken the mid-range NVIDIA GTX 760 GPU, which is a fantastic value even on its own, and has put a pair of them on a single PCB. Meet the ASUS ROG MARS 760.

Using the still very powerful Nvidia GTX 760 GPU (Reviewed Here), ASUS has found a nice middle ground between great performance and efficient cooling. The MARS 760 still comes in your standard two-slot package with ASUS Direct CU II cooler. This gives the MARS 760 20% better cooling, quieter operation, while still being up to 39% faster than the GeForce GTX Titan. This is all thanks to 4 GB of GDDR5 memory, dual 90 mm fans, 8 copper heat pipes, and 12 phase power VRMs. And because it’s only a two slot package, it will fit in the majority of gaming rigs today without crowding out your other expansion slots.

The ASUS MARS 760 graphics card will be like no other graphics card out there when it is released in the first half of December just in time for Christmas gaming. We don’t have a price yet, but I expect it to be very competitive to top end single GPU solutions like the GTX Titan, or even, the more recently released GTX 780 Ti (Reviewed Here). We’ll have to make up our minds when we get the price. Full press release below.

The GPU Tweak Streaming feature, the newest addition to the GPU Tweak tool, lets users share on-screen action over the Internet in real-time so others can watch live as games are played. It’s even possible to add a title to the streaming window along with scrolling text, pictures and webcam images.

MARS 760 will be available in North America in the first half of December.

Full specifications are available at www.asus.com.