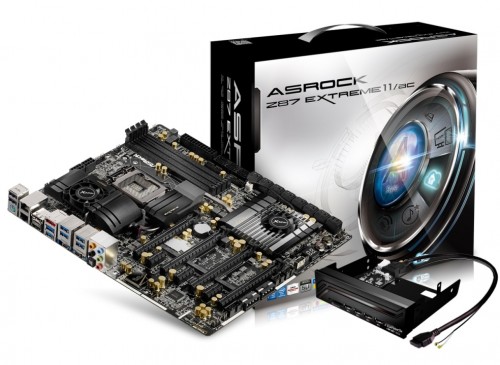 With the initial launch products out of the way, it seems that the Intel Z87 Platform is finally hitting its stride with boards that fill every need. From GIGABYTE’s unveiling of a motherboard clearly focused on gaming at a reasonable price, and another motherboard from ASUS focused on overclocking and breaking records (and the bank). Well, ASRock has a board that they think is the most powerful one of all, and they call it the Z87 Extreme 11/ac.

The focus of the Z87 Extreme11/ac seems to be on multimedia of all kinds, and taking this to the “extreme”. If you can think of a way to consume media, this motherboard can do it, sometimes in multiples. It comes with 4 PCIe 3.0 x16 slots for support of up to 4-way Crossfire/SLI, six USB 3.0 ports on the back, support for DDR3 up to 2933 MHz, 115 SNR audio provided by Purity Sound, and Dual Gigabit Ethernet ports. And those are just the “normal” specifications.

The ASRock Z87 Extreme11/ac goes on to support a mind-blowing array of additional features that include 22 SATA 3.0 ports. Six of which are native to the Z87 chipset with 16 SAS-3 (12 Gb/s) added with an LSI SAS 3008 controller and 3X24R Expander with speed up to a staggering 6.1 GB/s built right in! You can then take all the media of your massive array and back it up over twin Thunderbolt 2 ports or over WI-FI via the 2T2R dual band 802.11ac with speed up to 867 Mbps. 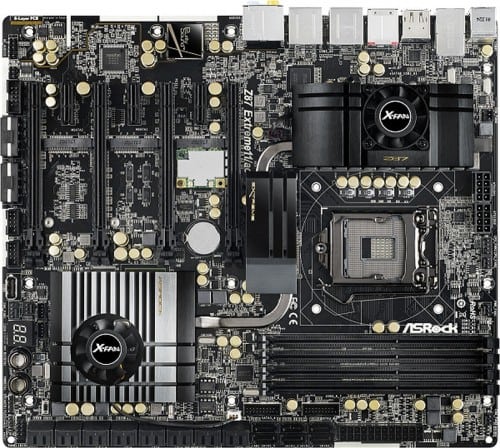 This motherboard could be the perfect motherboard to pair with the adaptable HAF Stacker as the core of both your gaming system and massive home entertainment server. Even the above face melting specs are just scratching the surface. No price available at this time, but you can expect it to be high as this is the new Flagship motherboard for ASRock.

For more information about the ASRock Z87 Extreme11/ac view the full press release below.

Meet the Most Powerful Z87 Motherboard on the Face of Earth: ASRock Z87 Extreme11/ac

November 18, 2013 – Amid the heaps of Z87 chipset motherboards which have already been around for a while, there can only be one that rises from the top with its delicacy and perfection. The long wait has ended, here comes the king of all Intel 8 Series motherboards. All hail ASRock Z87 Extreme11/ac, the most high end Z87 motherboard on the face of earth!

Using out of the world to describe ASRock’s flagship motherboard Z87 Extreme11/ac is actually an understatement. This motherboard boasts a whopping 22 SATA3 ports, including 6 SATA3 ports by Intel® Z87 chipset, and another 16 SAS-3 12.0 Gb/s ports from the added LSI™ SAS 3008 Controller plus 3X24R Expander, which can reach up to an unearthly 6.1 GB/s transfer speed!

Graphics aficionados shall also be overjoyed by the fact that ASRock Z87 Extreme11/ac in no way lacks VGA connectivity! Enhanced with a PLX PEX 8747 chip, it is capable of supporting 4-Way CrossFireX and 4-Way SLI with its solid PCIe 3.0 slots at x8/x8/x8/x8 mode to deliver mind blowing visuals.

As much as hardware specifications may seem exciting and luxurious, in the end, it’s usually practical features that provide satisfying user experiences that really matters. Without question, ASRock Z87 Extreme11/ac is built with A-Style features, including Home Cloud for remote wake and remote desktop anywhere anytime. The most top notch onboard audio solution Purity Sound™ 115dB SNR. And of course the world’s fastest 2T2R Dual Band 802.11ac WiFi + Bluetooth v4.0 module, which provides 867 Mbps crazy fast Internet connection, plus it comes with an exclusive Wi-SD Box for installing 4 USB 3.0 devices and an SD 3.0 card reader. Other features such as 12 Power Phase design, Dual-Stack MOSFET, Digi Power, Japan made gold capacitors can also be found on this motherboard, making Z87 Extreme 11/ac an epic choice for enthusiasts.

For more information about this product: http://www.asrock.com/MB/overview.asp?Model=Z87%20Extreme11/ac