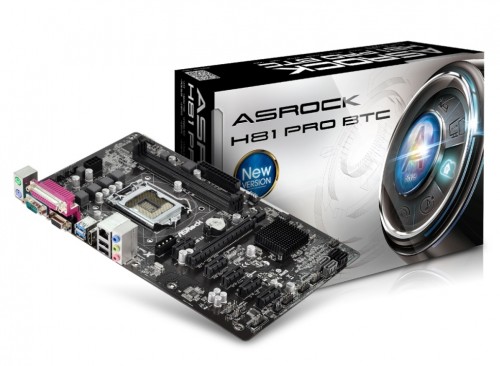 Some people are always looking for a way to make quick money, but there is always a catch. It usually ends up being immoral, illegal, or impossible. None of that applies to bitcoin mining which started as a small science project, but has recently exploded into a world-wide phenomenon. Now you can put all that old hardware you haven’t sold yet to work for you with the new ASRock H81 Pro BTC and H61 Pro BTC motherboards designed specifically for bitcoin mining.

If you are not familiar with bitcoin mining, it’s like an online simulation of mining for gold in your own private mountain with a randomized chance to find a currency called bitcoin. The fun part is that while the work is digital, the cash is real as the value of a single bitcoin fluctuates. You could start with $27 worth of coins and cash out a few years later for $886,000 cash like one Norwegian man did. It’s all over the news right now so I’m sure you can find more about it on Google.

For the PC DIY bitcoin miner, What makes the ASRock H81 Pro BTC and ASRock H61 Pro BTC special is high volume graphics horsepower. Since graphics cards are your miners, ASRock designed these boards to work with up to 6 GPUs at once to get as much calculating power into a single system as possible. Everything else is kept to a minimum to keep cost of entry down such as the older LGA 1155 socket, and two RAM slots for support up to 1600 MHz DIMMS, and 4 SATA ports. There’s even an additional MOLEX 4 pin power socket near the PCIe slots for supplying enough power to up these numbers of graphics cards.

Will you all make a fortune Bitcoin mining? I don’t know, but this could lower your costs and improve your chances. And if you are just not interested in Bitcoins, this is still a motherboard with support for the processing power of six graphics cards. You can Fold@home or Crunch for the Cause while minimizing power consumption and hardware clutter. More information is in the press release below. Official pricing was not available at this time.

November 15, 2013 – Dig the fact that there’s probably no way you’re ever going to end up dirty rich overnight, not unless you hit the jackpot or discover Davy Jones’ treasure. Or maybe what you could try is to mine for the legendary peer-to-peer digital currency bitcoin. Recently, bitcoin is gaining more and more popularity and value around the globe. A Norwegian man that invested in $27 of bitcoin back in 2009 fluctuated into $886,000 windfall. There’s also a new permanent bitcoin ATM installed in Canada. The process of obtaining these digital coins through computing is called “mining”, and ASRock is here to assist you to jump in the gold rush immediately with two new motherboards designed for bitcoin mining – H81 Pro BTC and H61 Pro BTC!

ASRock H81 Pro BTC is specifically tailored for bitcoin mining. It boasts a total of six PCIe slots for multiple mining graphics cards, plus two extra 4 pin power connectors for extra mining power. It’s never too late to try, who knows what might happen, maybe you’ll make a fortune out of it!