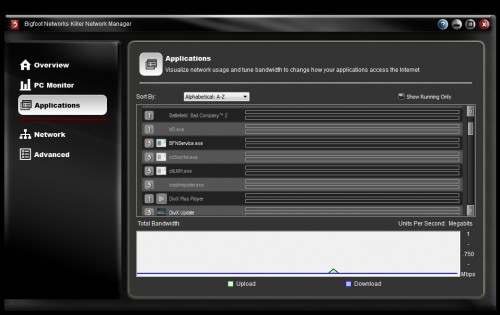 Bigfoot Networks produces high end network processing units (NPU). The Thunderbolt card offers both the E2100 Killer NIC as well as a Xonar audio processor onboard. Typically, Windows drivers/software aren’t optimized for gaming which adds to network latency. Gamer know that latency is the mother of all evil when in the heat of battle. The E2100 Thunderbolt combo is able to give your games and supporting game software network priority that is customizable. This makes sure sure that the game data gets handled immediately and directly by skipping the Windows stack. Games will load more efficiently getting you in quicker than your typical LAN connections.

Setting this program up was super easy. There is an initial automated set up procedure that registers and prioritizes your installed programs that access the network. The software is intuitive enough to go from installation to in game domination within 5-10 minutes. Chances are that you’ll notice a more fluid gaming experience now that you’re eliminating missing game packets coming and going to the server. It’s almost like a legal hack. 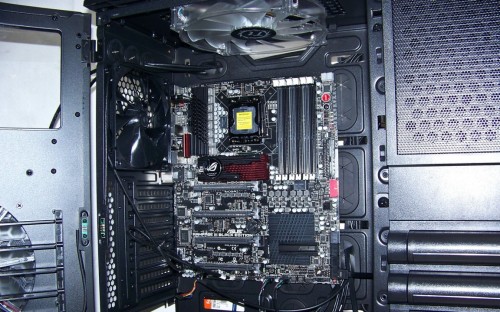 One thing I would like to point out is that your power source is extremely important if you plan setting any kind of overclocking record or filling every PCIE graphics slot. While the board is tuned to run efficiently, it does its best work with a very good power supply. Don’t forget to plug in the 4-pin Molex connector at the bottom to give the PCIE auxiliary power if you’re running multiple high end graphics cards.

Since the G1 Killer Assassin is the closet competition, we’ll be adding the board to the comparison chart. The rest of the list is part and parcel to our testing standards.

Since SATA3 platter drives haven’t noticeably benefited from motherboard SATA3 (6Gbp) controllers, I decided to use the Kingston HyperX 120GB SSD to test any native and/or third party controllers like the Marvell. This SSD will saturate the bus effectively as well as show us what these platforms can really do in terms of storage. The latest BIOS and NVIDIA 280 series drivers were used. 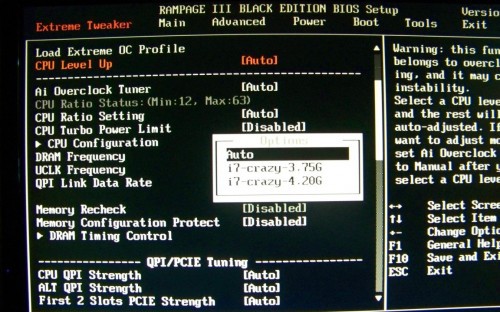 Like many of the ROG series boards, the Rampage III Extreme Black Edition features a BIOS not intended for the binary challenged.The very first page provides you with every CPU, memory and chipset setting needed to max out your CPU’s hidden potential. The voltage tuning is especially aggressive which LN2 users need more so than regular overclockers. It will take some time to become proficient versus the GIGABYTE G1 Killer Assassin which still uses the previous generation BIOS and is arguably quicker to get running. 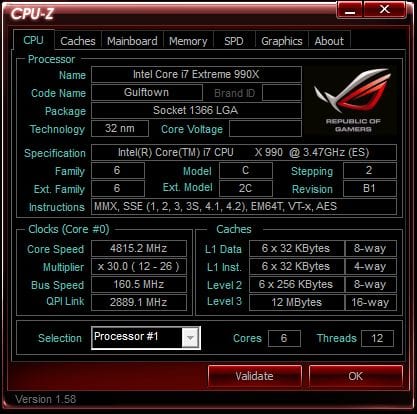 Starting off with the CPU bus clock, the maximum the board and processor provided at 1.48 to 1.5 volts was 160MHz. The CPU multiplier was especially loose up to 30 which netted a total of 4.8GHz. Try as I did, my particular Core i7-990X isn’t the best for overclocking as I’ve maxed it out here before on the GIGABYTE GA-X58A-OC board. That’s how it goes when overclocking sometimes. It’s luck of the draw. However, my Core i7-975X faired better at 170MHz BClock with a 29 multiplier with the same voltage settings.

Now, some folks don’t have or may not want to put the binary time in to get a max overclock. That’s just fine. There are two ore-programmed extreme settings for 3.7GHz and 4.2GHz. Both worked perfectly for the Core i7-975X, 980X and 990X processors. The system performance gains are very obvious running 4.2GHz paired with a couple of high end video cards. Add your SSD of choice and fly through the gaming world.

Overclocked results will be added in to some of the benchmarks where it best benefits the system. In some cases, the CPU is not the bottleneck given the 1920 x 1200 resolution of the test system. And, of course, if the system can’t make it through 3 passes of Sysmark 2007, it’s not considered stable when overclocked. 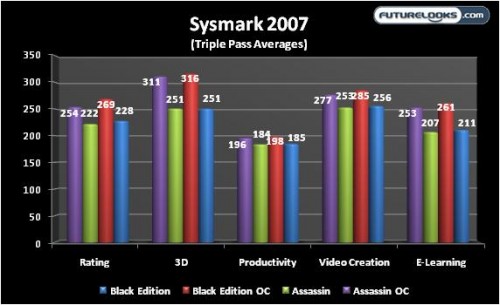 While users won’t typically use this platform for professional applications like the ones used in the benchmark, it’s still a testament to the stability built in to the Rampage III Black Edition. It’s extremely aggressive when it comes to controlling power requirements. It’s just that good.