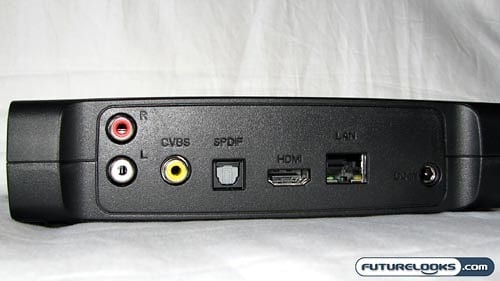 Swinging around to the back of the Asus media player, we find almost everything that we would want. If you are still rocking an old boob tube or you don’t have the available HD ports on the back of your television, the O!Play lets you do your thing via analog stereo audio and a composite video connection. There is no component output.

Moving to the digital side, you’ll find digital audio via SPDIF, which means that if your multimedia content is coded up for 5.1 surround sound, the Asus O!Play will let you do that. Next to the SPDIF port is the HDMI port, which is probably the one that you should be using. The O!Play does do full 1080p HD. There’s also the LAN port for connecting to your network. 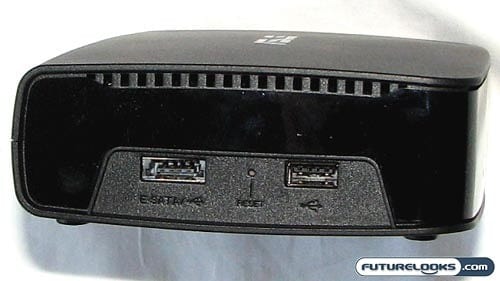 Along the left side (when viewed from the front), the Asus O!Play HDP-R1 gets two more ports. The one on the left is meant to be a combination port for eSATA or USB 2.0, though I believe you need an adapter to do the latter. On the right side is a standard USB 2.0 port. Through either of these, you can connect flash drives, portable hard drives, and other similar storage solutions. Alternatively, you can do the NAS thing through the aforementioned LAN port in the back.

To my knowledge, the inclusion of the eSATA port is unique to the Asus product. This is a huge plus for ensuring that your full 1080p is enjoyed as it should be enjoyed.

While the LAN and eSATA ports are certainly appreciated, the single biggest reason why I like the Asus product better than some of its competitors is the improved file format support list. The WDTV was already pretty good, but the O!Play is better.

In addition to the usual AVI thing, the Asus O!Play will also do MP4, MOV, Xvid, DivX, FLV, VOB, DAT, and more. It’s also very notable that this player will handle RMVB and MKV files. This is huge for people who like Taiwanese dramas, Japanese Anime, and other similar kinds of overseas content.

Even when it came to what I thought were standard old AVI files, I came across several video files that would not play on my Xbox 360 Media Center. They were perfectly fine with the Asus O!Play, however.

The user interface is relatively simple with the O!Play, but it is perfectly effective. The main menu takes on the appearance of a turntable, rotating you between movies, music, pictures, settings, and file transfer.

While deeper in the menus, you can switch between the different “modes” by hitting the mode button on the remote. 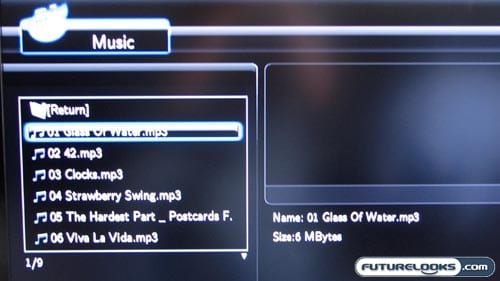 Unlike your iPod, the Asus O!Play does not appear to have the ability to read ID3 tags. Instead, it just shows the raw file name. You go through the hierarchal structure of your connected flash drive. The interface isn’t exactly robust, but it works. I also appreciate the ability to adjust the volume from the O!Play itself, instead of having to reach for my TV remote.

When you are browsing through videos and pictures, you actually get a preview in the upper-right window. The movie files will start to autoplay, just like on the Seagate FreeAgent Theater.