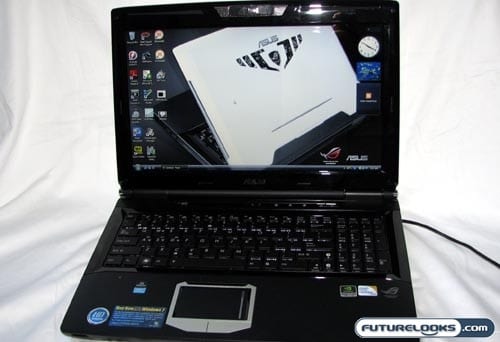 It used to be that if you wanted to get any serious PC gaming done that you needed to have a desktop computer. Later on, it became more viable to consider a gaming laptop instead, but these used to break the bank compared to desktops with equivalent specs and features. Well, the gap between the gaming desktop and the gaming notebook is shrinking faster than ever, both in terms of horsepower and price.

Today, we take a look at a gaming notebook that will satisfy the starving student budget while offering enough power to handle most current games without a hitch. The Asus G51Vx is a 15.6-inch laptop that comes equipped with NVIDIA GeForce GTX 260M dedicated graphics and it’s quite the looker too.

It wasn’t that long ago that you had to spend upwards of $3,000 (or more) to get your hands on a good gaming notebook. The Asus G51Vx won’t compete with some of the utterly insane machines you’d find through Alienware and the like, but at right around the $1,000 price point, it offers an incredible value. Especially with memory prices at an all-time low, one can fill it with cheap RAM and the Asus becomes quite a powerful system for gaming or work.

Interestingly, while Asus put the Eee PC 1005HA Seashell Netbook into a rather attractive and glossy box, the same cannot be said about the G51Vx. It came in a plain and unmarked brown cardboard box. I guess you have to cut costs where they matter the least, right?

The Asus G51Vx comes in a few different configurations, including options for quad-core processors. With the G51Vx-RX05 that serves as the subject of this review, you get the following:

The RX05 currently carries a retail price of $1049, making it one of the most affordable options with a powerful graphics card, HDMI-out, eSATA port, and more features that you would otherwise only expect to find in a more expensive unit.

There wasn’t anything in terms of surprises when I cracked open the plain brown cardboard box of this laptop. The box itself, as mentioned, was remarkably nondescript and the same can be said about the contents. 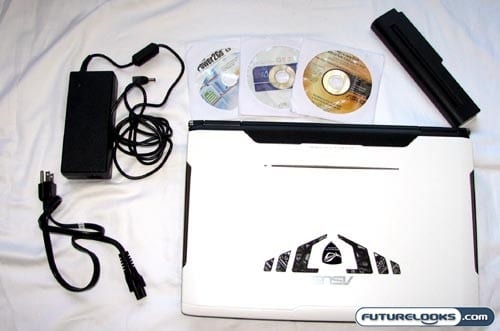 Aside from the G51Vx notebook itself, you get a standard (six-cell?) battery, the power supply and wall adapter cable, and a trio of installation discs. The three included discs are the recovery DVD for Windows Vista, the G60 notebook series driver and utility disc, and CyberLink Power2Go all media disc burning software.

Not a Laptop for Soccer Moms

When you go shopping for an affordable notebook option from companies like Toshiba and Dell, you usually end up with a machine that doesn’t have much in the personality department. You may get a splash of color here or there, but it’s unlikely you’d get anything that looks particularly fancy. The Asus G51Vx is quite different in this respect. The design styling is not unlike what you would expect from the Dell XPS line or a more expensive Alienware gaming notebook. Asus did some work to make the computer more aesthetically appealing to the gaming market.

The base is your regular matte black and it’s mostly matte black on the inside too, but the top cover will help garner some street cred for you when you take it out at LAN parties and the like. The glossy white cover looks great and it features an interesting design in the center as well. Not only that, but you get three bars of light that illuminate in a cool purple: two on the sides and one in the middle.

The G51Vx will never be confused for an ultra-portable. Tipping the scales at over seven pounds and measuring 14.6 x 10.3 x 1.6 inches, it’s clearly not the smallest of the bunch, but this is par for the course when it comes to most gaming notebooks. At least it’s not as massive as those 17-inch or 19-inch behemoths, right?