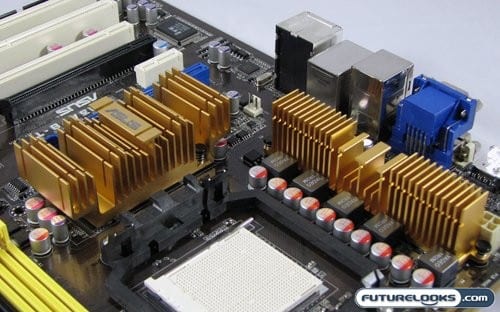 Now when you find a CPU cooler that is the right fit, it’ll be right at home in the cooling solution used on the Asus M3A78-T motherboard. Asus is committed to performance computing, even in many of their entry and mid range boards. To that end they’ve installed large passive heatsinks on both the Northbridge chip and MOSFETs. There’s also a passive heatsink on the Southbridge chipset. All this extra metal helps to keep everything running stable by keeping it cool, but it’s not the only contributing factor to system stability.

Power problems tend to be a large contributing factor in many issues of system stability. To counter this Asus, as well as many other manufacturers, are switch their fabs to using 100% high-quality polymer capacitors. As opposed to their liquid electrolyte containing cousins, these capacitors are solid and will not leak. They’re also much more stable than the former mentioned capacitors. Now Asus doesn’t mention specifically whether these capacitors are Japanese manufactured, but at least the use of these types of solid capacitors is a step in the right direction. 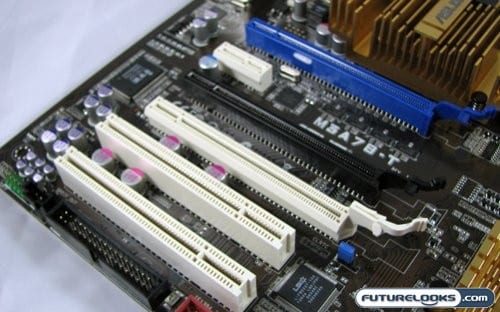 As mentioned in the specifications, the Asus M3A78-T supports Hybrid CrossfireX. What that means exactly is that you can install one or more equivalent video cards in the provided PCIe slots, and use them in concert with the onboard video. This board also supports Quad-Crossfire, allowing you to install two dual-GPU cards and utilize all four GPUs on those two cards. 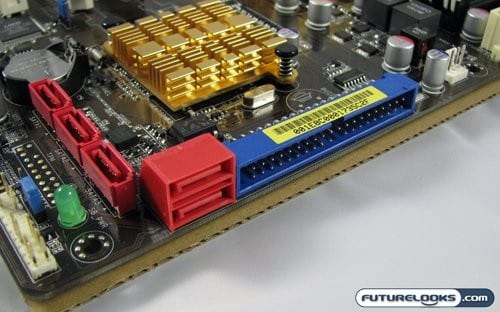 When it comes to hooking up drives, the M3A78-T has what one could consider an average number of SATA ports; five to be exact. There’s also a parallel ATA port. All these ports can operate in RAID 0, 1, 5 and 10. All ports are controlled by the AMD Southbridge chipset, so there’s no confusion is trying to figure out which ports is controlled by which controller. 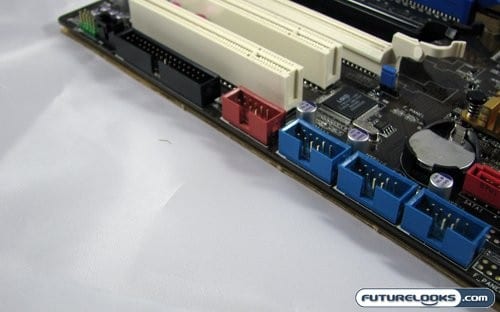 Along the lower edge on the motherboard you’ll find all the incidental connectors and headers. This includes things like the front USB ports (which support a whopping 6 extra USB ports), front FireWire ports, and front panel audio. The floppy port can also be found here, is a rather precarious position. Not shown is the front panel LED and power connections, which should be very easy to setup, should you use the afore mentioned Q-Connector.