Platter based desktop hard drives get bigger and faster every year, as evident by the introduction of products like the enormous Western Digital’s 2TB Caviar Green and the high speed WD Velociraptor. While desktop drives seem to have free reign to be as fast and as large as they want to be, notebook drives have unique restrictions that prevent them from following the pace of their desktop counterparts. This of course being physical size and energy efficiency; both of which prevent notebook drives from as big or spin as fast as their big brothers.

It’s easy to just say “SSD is the future”, which I have no doubt that it will be in time. However, the cost of equivalent sized SSD drives, which to their credit give much faster performance and lower power consumption, can easily be ten times the price of similar sized platter based counterparts. Until SSD prices drop to the point where it no longer costs more than your laptop, platters will be where it’s at. Platters also give you the storage you need for all those videos, pictures and music files.

In order to fill this need for performance, energy efficiency and storage, Seagate Technology gives us their latest product in their notebook drive line: The Momentus 7200.4 500GB SATA Notebook Hard Drive.

The Momentus 7200.4 series comes in capacities from 160GB to 500GB’s (as tested). The 500GB size of our test unit also makes it one of the largest platter based notebook drives available today. This is coupled with 16 MB of cache and a SATA 3Gb/s NCQ interface. The drive also features a fast 7200RPM spindle speed which makes it fly across the high aerial density platters.

The drive comes in two flavours: One with Seagate’s anti-shock feature known as G-Force, which uses a built in freefall sensor that parks the heads when it is dropped from a height greater than 8 inches, and one without. You can tell them apart by their part numbers:  ST9500420ASG (G-Force) and ST9500420AS (no G-Force). We’ll be testing out the latter

Probably one of the biggest features of this drive, in keeping with its mobile orientation, is the fact that it sips power for a 7200RPM drive. Typically, 7200RPM drives give up performance for power consumption. However, Seagate says that they’ve been able to give you the cake and allow you to eat it too by incorporating improved laptop power management technology and by using a ramp load feature that removes the heads from the drive when not in use, thus saving power. It’s also designed to be extremely quiet. We’ll definitely be taking a hard look at both aspects.

The drive has been in high demand lately (at least in this part of the world) and will set you back about $150 with the G-Force version costing you about $160. Make sure you know which version you are getting based on the part number. Mac users will want to steer clear of the G-Force version as it has been reported that it interferes with the freefall sensor built into their notebooks. If you know your machine has no freefall sensor, then it’s a little bit of added insurance that I would invest in for the stuff you care about.

I installed our test unit into a MacBook Pro 2.5GHz (Pre-Unibody), replacing the original 250GB Hitachi Travelstar 5K250 drive. I actually thought that the Momentus was a little heavier, but a quick check revealed that it was only ten grams heavier than the Hitachi at 110g on the scale. I must be very sensitive.

MacBook Pro installers may also want to be aware that the breathing hole that you are not supposed to cover is covered by the ribbon cable that is stuck to the original drive, when you reinstall it onto this drive. You will want to make sure that you move this over a little bit before reassembling, if it is in the way. 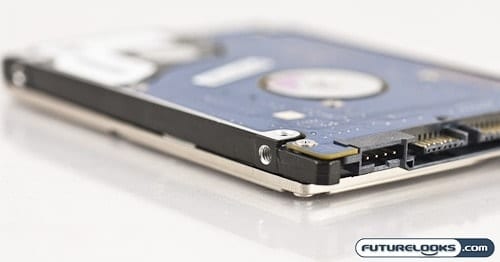 Since I had cloned my installation to the Momentus beforehand using Carbon Copy Cloner, there was no need to install anything. I just booted the machine up and away I went. What I did notice immediately when booting up was that it was noticeably faster getting to the desktop. Not a lot faster, but enough for me to notice that I’m not waiting as long. In hindsight, I wish I’d timed it so you’ll just have to take my subjective observation for it. Hopefully you’ll get the picture in the benchmarks.

Once into the desktop, I opened my usual applications and just started enjoying the extra responsiveness. It was quite a bit quicker at snapping open programs and moving files back and forth. I noticed this extra speed the most when I started up my VMWare install of Windows Vista. Before it would just chug along and seemingly freeze on occasion when loading up Outlook. Now it just loads Outlook.