ASRock is jumping into the Skylake fray with three newly announced motherboards. They’re sticking to their three product lines – the Extreme Series, ASRock Gaming Series and OC Formula Series – and just offering Z170 based options in each. These are boards that ASRock is boldly claiming “others can’t touch.” 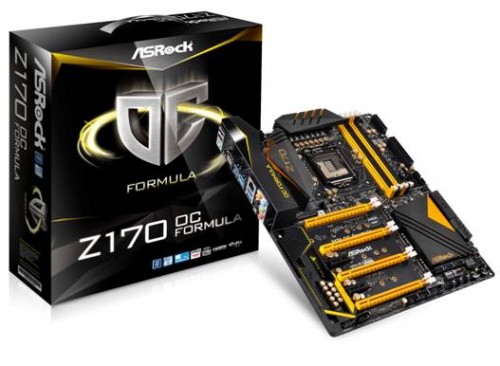 That bold quote is mostly in reference to the top tier of ASRock’s Z170 offerings. The Z170 OC Formula will fully support DDR4 DIMM modules up to 4000MHz, as well as four Gen3 x16 PCIe slots for all your multi-GPU desires. This is the performance board from this line, and will provide a solid base to build an absolutely amazing Skylake system on. 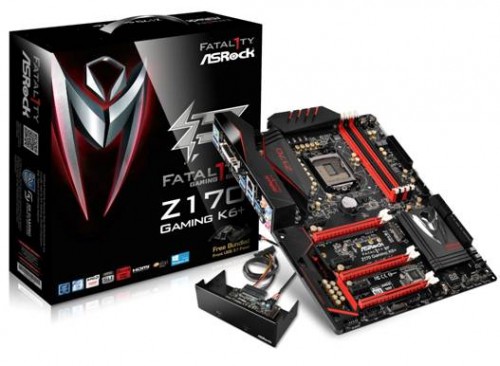 If it wasn’t apparent from the name, the ASRock Z170 Gaming K6+ is more gaming oriented. It does still come with some excellent features though. Of course you are able to configure a CrossFireX or SLI setup using the PCIe Gen3 x16 slots. You also won’t be let down in the audio department, as this board uses Purity Sound 3, and scores an excellent rating in general performance in RightMark. 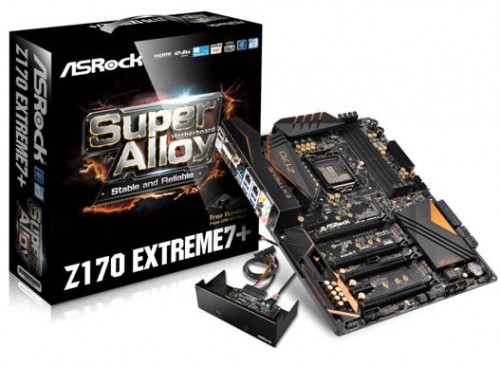 The ASRock  Z170 Extreme7+ is the board for those who need a good foundation for a workstation. The  four PCIe Gen3 x16 slots not only support ordinary graphics cards, but also professional-grade graphics cards like the AMD FirePro and NVIDIA Quadro. It also boasts great storage options, with ten SATA3 ports and three SATA Express ports. There’s also three Ultra M.2 slots that support ASRock’s U.2 Kit, as well as Intel 750 SSDs if you want to build a ridiculously fast PCIe SSD RAID 0 array.

Pricing and availability on these boards hasn’t been announced yet, but you can check out the press release below for more info.

TAIPEI, Taiwan, August 5, 2015 – Intel’s 100 Series, otherwise known as Skylake, the successor of Intel’s Broadwell chips, not to be confused with Skynet and the end of human civilization, has finally arrived! The spearhead Z170 chipset are the first to make an appearance, while the embargo dates of others are drawing near as well. This year, ASRock continues its three motherboard product lines, the Extreme Series, ASRock Gaming Series and OC Formula Series.

The Extreme Series includes a proud generation of high performance motherboards, specifically tailored for designers and enthusiasts, with Z170 Extreme7+ leading the battalion. This bad boy has four PCIe Gen3 x16 slots that not only support ordinary graphics cards, but also workstation pro graphics cards, such as AMD FirePro cards and Nvidia Quadro cards. Better yet, besides the ten onboard SATA3 ports, it also comes with three SATA Express ports, and another three Ultra M.2 slots that support ASRock’s U.2 Kit and Intel 750 SSDs for a monstrous PCIe SSD RAID 0 array.

Meanwhile, ASRock Gaming Series most top tier model would be Z170 Gaming K6+. Aside from the basic PCIe Gen3 x16 slots for building CrossFireX or SLI configurations, this time the onboard audio solution has evolved into Purity Sound 3 and has unlocked the achievement “General performance: Excellent” on Rightmark, the professional audio testing tool. Another huge highlight would be the world’s first and only front USB 3.1 panel, which is free bundled with all models that have a “+” in their name. SATA Express ports have been neglected since the day they arrived on motherboards, but now they’ve finally found a meaning for existence, and it’s for installing ASRock’s front USB 3.1 panel to provide a pair of Type-A and Type-C USB 3.1 ports on the front of your chassis.

Finally, Z170 OC Formula. ASRock is still saving the best for the last, so inhale slowly and just imagine a motherboard coated in black and yellow. The board will hold unruly DDR4 DIMM slots that rocket up to over 4000MHz, and there will also be four PCIE Gen3 x16 slots and three additional Ultra M.2 slots for creating a RAID 0. If anyone ever questions you why would you even need a motherboard with such overwhelming performance? Or what applications justify for a PCIe RAID 0 array consisting seven PCIe SSDs? You simply answer, “Because others can’t touch this.”

For more 100 Series motherboards, head over to:
www.asrock.com

Or visit our YouTube Channel for a taste of Z170 Extreme7+ and PCIe SSD RAID 0:

ASRock has been growing fast and has become one of the three largest motherboard brands with its headquarters in Taipei, Taiwan and branches in Europe and the USA. The young and vibrant company targets at the entry to mainstream segment of the MB business, owning reputation around the world market with its reliability and proficiency. For further information, please visit: http://www.asrock.com/