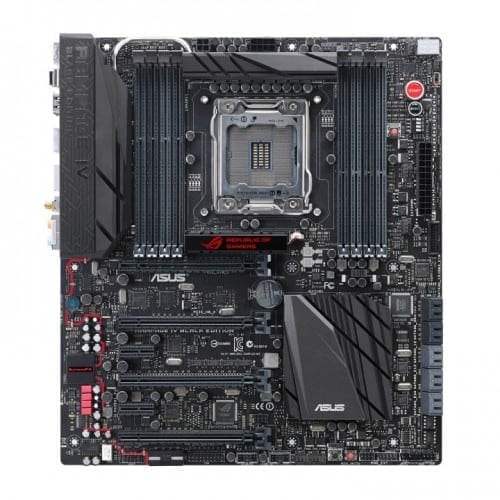 There is more to this motherboard than the eyes can see. ASUS has packed a lot of tried and true technology as well as some great new innovations into their latest Republic of Gamers (ROG) motherboard. This is the new Rampage IV Black Edition and it may just be the perfect balance between overclocking and gaming.

The Rampage IV Black Edition is an E-ATX motherboard designed for the Intel LGA 2011 socket (Ivy Bridge-E processor family) with the Intel X79 Express chipset. It includes all of the best ROG technologies such as four PCI-E 3.0 x16 slots, eight DIMM slots support 64 GB RAM Disk, premium sound from the SupremeFX Black, and RoG Sonic Radar. It also comes with the ASUS award-winning UEFI BIOS. And all this is just the basics. 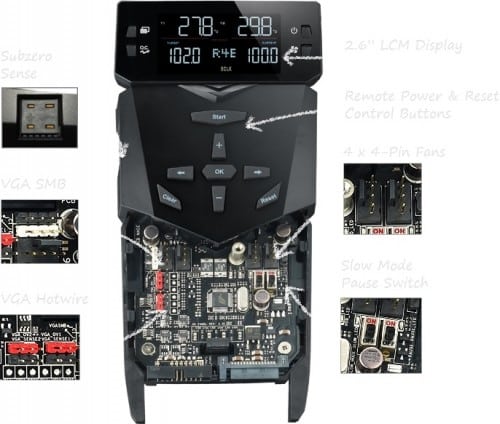 What separates the Rampage IV Black Edition from the rest is the Overclocking Panel. A dedicated piece of hardware you can use to directly access your motherboard’s sensors and overclocking features. There is no need to go through third-party software, or reboot every time you make a major change. The Overclocking Panel gives you up to the second system information and the power to change the Rampage IV’s performance in an instant, making the overclocking process much more accessible.

ASUS didn’t forget about gamers either. In addition to the high quality audio solution, RAM Disk to load your games 10 times faster than an SSD, and Extreme Engine III Digi+ VRM, ASUS also brings GameFirst II. This software will regulate network traffic and ensure your games get priority over everything else. Now there is no need to turn off an update, stop a download, etc. You can just play your favorite game like Assassin’s Creed IV Black Flag, for example, which comes free with the Rampage IV Black Edition.

The ASUS ROG Rampage IV Black Edition will be available on November 18th, 2013 for a wallet scorching $499 US MSRP at NewEgg. More details are available in the press release below.

Based on the Intel X79 Express chipset, the Rampage IV Black Edition includes all of the best ROG technologies and innovations for unrivaled gaming and overclocking performance. With its four PCI-E 3.0 x16 slots, two PCI-E 2.0 x1 slots and eight DIMM slots supporting up to 64GB of overclocked DDR3 DRAM, the Rampage IV Black Edition has near limitless expansion possibilities, including support for both 4-way NVIDIA® SLI™ and AMD CrossFireX™.

ASUS designed the Rampage IV Black Edition for those who demand the ultimate feature set. It includes the OC Panel, a real-time system-monitoring and tuning console that is great for gamers and a huge advantage for overclockers. It can be mounted internally for everyday monitoring of temperatures, base clock and fan speeds while also offering one-click CPU Level Up for an instant speed boost. Externally, it can be used to monitor and control multiple parameters in real-time via onboard buttons. Extreme overclocking has never been easier.

Prior to becoming widely available, world-class overclockers have already demonstrated the Rampage IV Black Edition’s record-breaking capabilities as it currently holds chart-topping scores in top benchmarks and numerous other world records on the X79 platform.

Built for the most demanding games and gamers

In order to be able to push the limits, ROG engineers combined thoughtful design with superior quality components.

ROG’s Sonic Radar on-screen overlay provides fans of first-person shooter (FPS) games with an ear to the ground, as it displays the precise direction and origin of in-game sounds such as gunshots, footsteps and call-outs — giving ROG gamers a leg-up when trying to pinpoint the enemy.

Ultra-fast Intel Gigabit Ethernet with ROG’s GameFirst II utility optimizes network traffic to keep latency to a minimum and reduce all-important ping times. The ROG RAMDisk utility allows up to 80% of a computer’s available RAM to be used as a high-speed virtual drive — lending a strong performance boost to many modern games that regularly read or write data during gameplay.

The Rampage IV Black Edition is currently available for pre-order at Newegg.com for US Customers and Canada Computers , Memory Express and NCIX for Canadian customers. General availability is scheduled the week of November 18, 2013.

Full product specifications are available at http://rog.asus.com. Watch the Rampage IV Black Edition in action by viewing the product video at http://bit.ly/Rampage4BE.