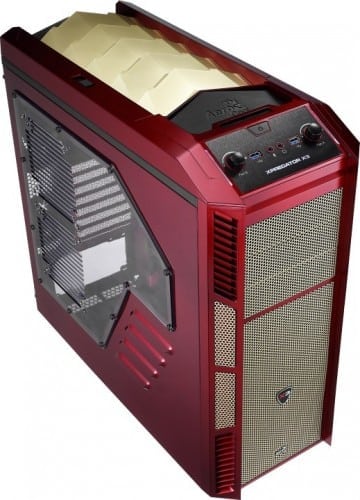 AeroCool is ready to refresh their XPredator lineup with an all new design and style. Starting with a solid base design and expanding on it, AeroCool created the new XPredator Avenger and X3 Avenger. Then they took it a step further with an eye-catching paint job which takes obvious queues from a certain fictional genius, billionaire, playboy, and philanthropist. The question is are the specs just a great as the gorgeous looking exterior?

Shown above is the AeroCool X3 Avenger which is a mid-tower case with two USB 3.0 ports, fan controller knobs, and audio I/O ports on the front panel. It also has 3 front 5.25″ ODD bays, a unique cut side window, and plenty of ventilation to keep your PC as cool as possible. On the interior you will find plenty of space for up to 8 drives and 8 expansion slots. The X3 Avenger looks to be flexible, yet a compact design, but if it’s not enough space for you, AeroCool also has the XPredator Avenger. 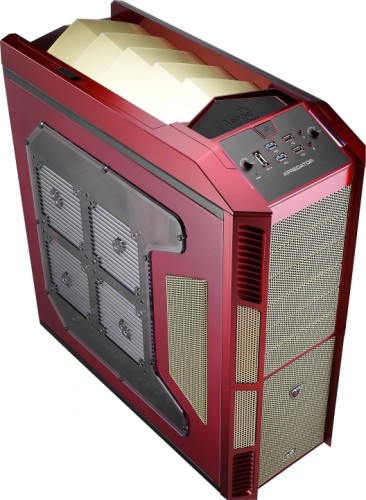 Also taking a queue from the aforementioned fictional character in the Marvel Universe, the AeroCool XPredator Avenger is the full-tower version with room for up to E-ATX and XL-ATX motherboards. And as some of you have no doubt figured it out, these two new cases are based on the design made slightly more famous by the Rosewill Thor V2 we previously reviewed. Much of the features are very much the same so its worth having a look at our thoughts on that case. But obvious differences are the new side panel and the color scheme.

Both cases will become available this week with an MSRP of 124.90 EUR ($170.00) for the XPredator Avenger and 104.90 EUR ($142.80) for the X3 Avenger. This could be a great case for those looking to build a system around the AMD FX platform thanks to the bright red and black color schemes. They definitely seem like more than just a striking paint job, but it is a premium addition I will not scoff at. More details are in the press release below.

26-11-2013 – Aerocool Advanced Technologies, one of world’s leading manufacturers of excellent gaming PC gear, introduces the Avenger models as new additions to the XPredator super tower and the XPredator X3 high mid tower. Both chassis are part of the performance gaming system series PGS-B, aiming for ambitious Gamers. New Avenger models are bringing a really fresh and exciting color-mix to the PGS-B series.

Aerocool took a very different approach when designing the chassis: Compared to the usual models, which feature a mix of black and red as well as white and blue, new Avenger models are using a mix of the colors gold and red. This fancy color combination is not only used on the outside but has been well implemented on the inside as well.

Users requiring much space, will love the XPredator Avenger super tower, which offers compatibility to almost all possible mainboard form-factors, including ATX, Flex-ATX, µATX, E-ATX as well as XL-ATX! Slightly more compact XPredator X3 Avenger supports form-factors such as ITX, Micro-ATX and standard ATX. Both chassis provide much space for hard drives, solid state disks, bay accessories and optical drives. XPredator Avenger features six 5,25 inch bays, six bays for 3,5 and 2,5 inch hard drives and SSDs as well as one (external) 3,5 inch bay. In case of the XPredator X3 Avenger, up to eight 2,5 or 3,5 inch drives, three 5,25 inch drives, one additional (external) 3,5 inch drive can be easily mounted. Aerocool implemented one Hot Swap Slot on the outside front-panel of the XPredator X3 Avenger, which supports direct connection of 2,5 inch HDDs and SSDs. Both chassis are equipped with tool-free mechanisms and trays for the hard drive bays, allowing more fast and convenient mounting procedure.

Even in terms of cooling capabilities, no compromise has to be made. XPredator Avenger allows mounting of big CPU coolers with a total height of up to 18,5 cm and VGA cards with a total length of up to 33 cm. The midi tower XPredator X3 Avenger is offering much space for big CPU coolers with a height of up to 18,6 cm and high end VGA cards with a length of up to 31 cm. Plenty of room for watercooling systems and additional fans, a cable management system and pre-drilled holes for water-pipes are provided as well.

The very fresh design of the new Avenger models attracts attention, especially at LAN parties. A re-worked I/O panel is located in the center of the top panel of the XPredator Avenger, and brings some changes as well. Instead of three USB 2.0 and only one USB 3.0 ports, users have now access to two USB 3.0 and two USB 2.0 ports. The Headphone and Mic jack as well as the eSATA port remain in the I/O panel. Both XPredator Avenger and XPredator X3 Avenger are supplied with a very use-ful two-channel fan controller, which is located in the I/O panel.