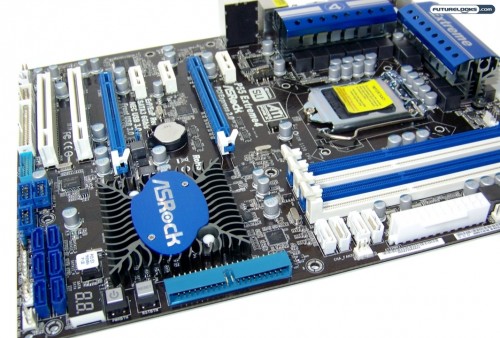 There are plenty of low cost motherboards to choose from and what we need from them are a mix of reliability and performance. Low cost boards typically last you a year of hard use, need more maintenance, and there is guarantee of stability or reliability. Not to mention an odd mix of compatibility issues. Good budget motherboards carry higher quality parts that last considerably longer, have less compatibility issues, and can keep up with you for the longer haul. ASRock believes they offer this with a few more up to date features. Let’s check out their new ASRock P55 Extreme4 motherboard to see if that’s true.

Built around the Intel P55 chipset, the ASRock P55 Extreme4 supports ATI CrossfireX and NVidia SLI. Quad configurations are capable as long as dual GPU PCIe graphics cards are used. However, at 8x by 8x PCIe bandwidth, this platform would favor two very capable single GPU cards as apposed to a quad configuration. That should be enough for hardcore graphics fiends.

In terms of IO, there are 6 SATA2 and 4 SATA3 ports, plus one eSATA in the back, it has just as much storage capacity as some flagship boards. There’s even an extra dual port USB 3.0 enclosure bracket and two rear USB 3.0 IO ports.

Since, some folks may want to use the board for something other than gaming, the board uses a Realtek ALC892 high definition 8 channel audio Codec. This is a step up from the previous generation ALC889 and ALC889A. The ALC892 supports THX TruStudio Pro and Premium Blu-ray audio. Theoretically, that equates to something a bit more capable for those wanting their money’s worth in terms of better audio. 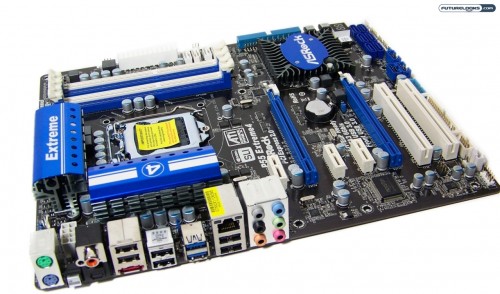 Performance features include dual channel DDR3 memory support up to 2600MHz. That’s no small feat even for today’s fastest memory modules. We know the Intel LGA1156 processors are capable of keeping up and it’s up to the motherboard to help make that happen. Perhaps the Duracaps and updated VRM components surrounding the CPU socket are up to the task. However, we’ve realistically never seen a board capable of maintaining a max DDR3 overclock  and max CPU overclock simultaneously. I would settle for a good solid 2000MHz DDR3 frequency and moderate overclock any day.

So, how much does this little platform set you back? It’s actually pretty evenly priced with other comparable platforms at around $144.99 USD at your usual places.

A Close Look at the ASRock P55 Extreme4

One thing you’ve probably already noticed is that the board has a similar white on blue heat sink theme to GIGABYTE boards. But, then a lot of boards are using blue, white these days. There’s only so many ways to dress them up. Here’s a quick walk through and a little more…

The overall layout isn’t without some minor faults. The placement of the 4 white SATA ports near the 24-pin power and DIMM slots isn’t really a DIY user’s first choice. We like our cabling as far away from the memory, CPU coolers, and video cards as possible. It keeps things manageable as well as clean for those of us who like to show off.

I’ll be comparing the ASRock P55 Extreme4 to the performance of the very solid GIGABYTE GA-P55A-UD3 motherboard. Both boards are similar in price and offer nearly identical features except where DDR3 overclocking is concerned. The Extreme 4 supports up to 2600 MHz where as the P55A-UD3 supports 2200 MHz, overclocked of course.

Here are the test system’s specs:

Intel Speed Step was left enabled since these platforms tend to operate a little differently when implementing this CPU feature. This setting tends to reflect on the polishing of the BIOS from board to board and reveal any issues that may come up.