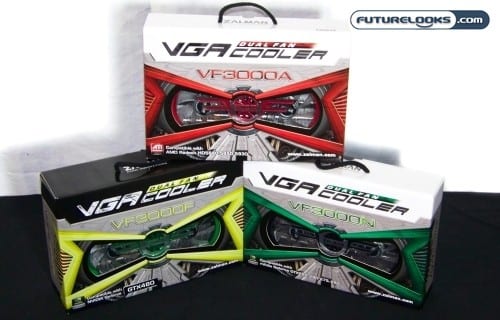 The current generation of video cards from ATI and especially nVidia have been some of the hottest in recent history. Recent GPUs like the GTX200, GTX400, and HD5800 graphics processors heat up between 80 to 95C while used in regular gaming. In their defense, the GPUs wouldn’t be such a hot topic if the reference coolers were better designed. This has lead to a big demand for better VGA cooling solutions. Zalman, who has established themselves as the connoisseurs of cool, has recently launched the VF3000A, VF3000F, and VF3000N VGA coolers. With a small tool kit and one of these coolers, your video card can go from nuclear to icy cold in no time. 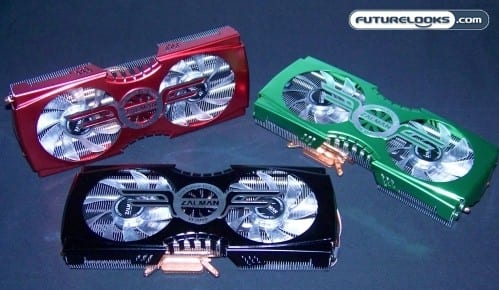 First, let’s clarify which coolers are for which video cards. Starting with the bright red VF3000A (A for ATI), this cooler is compatible with the hottest of the single HD5800 series video cards which includes the HD5830, HD 5850, and HD 5870.

The black VF3000N (N for NVidia) is compatible with GX 260, 275, 280, and 285 video cards. There are still quite a few out there and many are sporting the square, 80C topping lack luster reference coolers. Fortunately, this VGA fits nicely with any of these GPUs.

Finally, the newest addition to the lineup, the green VF3000F (F for Fermi) makes its debut aimed at cooling off the NVidia GTX400 series video cards. This VGA cooler is compatible with GTX465, GTX470, and GTX480. And, with all the rumors flying around about a revised GTX 475 and 485 GPUs arriving sometime in Q4, we have discovered the VF3000F should also be compatible as the card design remains relatively unchanged.

All three VGA coolers offer common features which includes two capable 92mm LED cooling fans with similar 1300 to 3000 rpm and noise ratings. However, the VF3000F spins in at a higher 1500rpm minimum. The coolers are rated up to 32/33dBA of noise. Compared to the reference coolers on both ATI and NVidia video cards, it’s still much quieter. Factor in heat pipes and we have the potential for much lower temps.

As a special value added feature to our review, we’ll be taking you through a full video unboxing and walkthrough of the VF3000 series GPUs including some installation notes

As you can see, the VF3000 series coolers are very high quality through and through.

In order to properly test the barrage of coolers, we’ve assembled a system using the following components:

We wanted to give you a little extra in terms of a cooling comparison. Since the GELID Icy Vision Rev 1.0 carries our coveted recommendation, we thought it prudent to compare against all three of the VF3000 series VGA coolers. In fact, the Icy Vision is compatible with all three test video cards while the Zalman coolers vary based on a little change in the copper base placement. However, Zalman’s appear more centered in relation to the PCB, while the Icy Vision can seem a little off axis due to it’s multi-GPU compatibility.

Our GIGABYTE HD5870 1GB video card boasts a twin fan heat pipe aftermarket VGA cooler. Thus, our temperatures were much lower than the standard HD5870 reference card coolers. It also just adds a little extra perspective on how valuable aftermarket coolers can be to the video card partners.