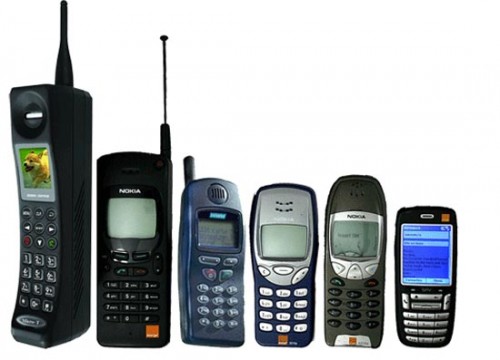 The world of cell phones has certainly come a long way since the days of the Zack Morris brick phone. These days, we’re very much ensconced in a realm occupied by giant touchscreens, accelerometers, location-based services, and instant messaging. It wasn’t always this way and we need to pay homage to the devices that paved the way for companies to “reinvent” these technologies for today.

Follow me as we take a stroll down the history of mobile phones, unearthing many of the major milestones and cell phone firsts that revolutionized the industry over the years.

First iTunes Phone (Not the iPhone)

It seems that everyone is in love with the Apple iPhone these days, but ironically enough, the iPhone wasn’t even the first iTunes-enabled mobile phone. With no experience in the world of cell phones, Apple first got its feet wet by partnering up with the experts at Motorola. The result? The Motorola ROKR E1 was revealed to the world as the first iTunes-connected cell phone in 2005. It was largely a re-badged version of the existing Motorola E398 candybar phone (also known as the E790) and it was the first to be integrated with the iTunes music player.

This way, the music you purchased in the iTunes Store could be enjoyed on the go with a cell phone. The interface on the ROKR E1 mimicked that of the iPod, but the firmware limited it to storing no more than 100 songs at a time. Sales figures, understandably, were less than stellar and the ROKR goes down in history as one of Apple’s seldom spoken about disasters.

It may seem harder to find a cell phone without an embedded camera nowadays, but there was a time when mobile phones lacked picture-taking capabilities. That changed with the arrival of the Sharp J-SH04 in 2000.

Launched through J-Phone (which later became SoftBank Mobile), this was the first commercially available camera phone in the world. It offered a mere 0.1 megapixel resolution and sold for about US$500. It was preceded by a custom camera phone created by Phillipe Kahn in 1997.

In North America, the first camera phone was the Sanyo SCP-5300 through Sprint in 2002. While camera phones still aren’t quite as good as real digital cameras (in general), devices like the HTC Incredible with its 8MP camera are getting awfully close.

At some point, mobile phones became so much more than just mobile phones. They became mobile computers and we needed more than a numeric keypad. The QWERTY keyboard entered the arena with the Nokia 9000 Communicator in 1996.

While closed, this phone looked much like other bar-style phones of the day (aside from being a LOT bigger), but it opened up to reveal a secondary display and the full QWERTY keyboard. This form factor remains popular today for many messaging phones.

In addition to offering the first QWERTY keyboard on a cell phone, the Nokia 9000 Communicator also boasted an Intel 24MHz processor, 8MB of memory, and plenty of PDA-esque functions. Needless to say, today’s Nokia smartphones are a little more advanced than what was offered back in the day.