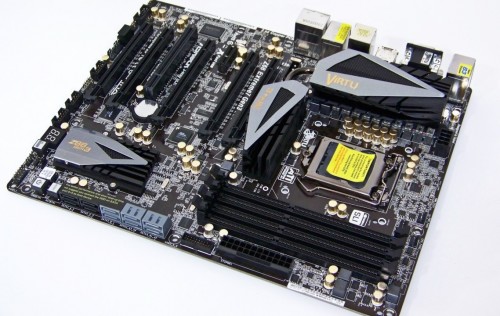 Sandy Bridge processors and Cougar Point motherboards are the current dual channel standards to beat. In fact, the platform is sailing along so well that it doesn’t show any signs of slowing down and should do so well into next year. About the only thing manufacturers can do is modify the motherboards with some refinements, extra features and dashing good looks.  Today, we’re taking the ASRock Z68 Extreme 7 Gen 3 motherboard for a virtual spin. It utilizes the latest Z68 features, will support PCIE 3.0 when the new CPUs and peripherals arrive, has a new enthusiast focused theme and of course the promise of a new computing experience. Let’s have a look at what else the platform offers. 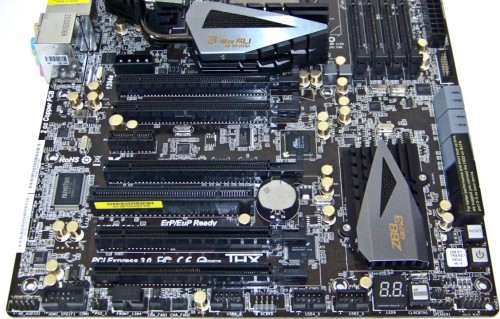 Simply put, the Extreme 7 is nothing like its younger Extreme 4 sibling. This motherboard actually looks very cool. The anodized “blade” shaped heat sinks along with the gold on black theme are welcomed and makes this board stand out from the rest of the crowd. It looks so good that I can’t help but think it should be their flagship Z68 motherboard instead of the “Fatality Edition” that is currently the top dog. the Extreme 7 offers NVIDIA 3-Way NVIDIA SLI and AMD CrossfireX for crying out loud. It looks like it can rock!

Underneath the heat sinks near the CPU socket are ASRock’s own 8Phase + 4 Power Phase support. That’s more than enough power to push a 2600K or 2700K processor in to the 5GHz range as long as the CPU is up to the task. Of course, there are a few other circuits that help maintain stability which we’ll be looking for. Finishing off the platform is the use of a PLX PEX8608 chip which removes the PCIE bandwidth limitations that the stock Z68 platform faces. Populate as many slots and ports as you like. You’ll still have full function even with all the ports and slots plugged.

XFast LAN technology which is a new feature for ASRock is a network software tool used in conjunction with the Broadcom BMC57781 network processor offered on the board. The application simply allows you to prioritize all your programs that utilize the network. It still runs through the Windows stack but at least configured based on your needs. The program can improve some game-network communication latencies somewhat like the BigFoot Networks Killer E2100 NICs but without the hardware support.

In terms of the software bundle, ASRock includes MAGIX Multimedia Suite which includes Mufin Player, Music Maker Silver, Video Easy SE and Photo Manager 10. They aren’t the most intuitive programs but are essentially more than the average user will need. They fortunately appear to be a true free bundle though not optimized for Sandy Bridge. Media Espresso 6.5 is Sandy Bridge optimized and included on the disc as a “Free Bundle” yet it is only trial software. ASRock pulled the “trial software” fast one on us in the past and we wish they’d stop doing that.

As for availability and pricing, the ASRock Z68 Extreme 7 Gen 3 board will run you $269 – 289 US which is definitely not chump change. Tracking it down also seems a bit more difficult, but you can always find it online at NewEgg or some other online retailers that deal ASRock. 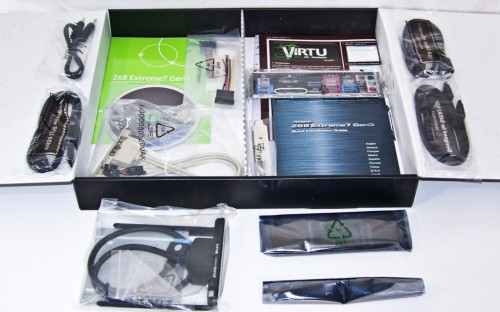 Let’s break down the test system and get straight to the benchmarks. We’ll be using a familiar Kingston V+100 SSD in our tests since running Intel Smart Response is what the INTEL Z68 chipset is made for. If you want to see benchmarks on how the V+100 stands up under Smart Response benchmarks, check out the article right here.

All of the scores from the Z68 boards we’ve amassed will be included. The same video and CPU IGP drivers used with our original Z68 five way round up are being used to eliminate variables. On with the show! 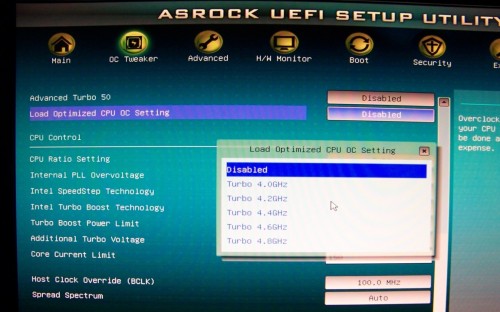 ASRock’s current UEFI BIOS is actually quite simple to navigate. Finding the settings needed to turn that stock 3.4GHz Core i7-2600K into a new number crunching animal is relatively easy. Frequencies and voltages are within the same page. So are all the programed overclocked settings which go all the way up to 4.8GHz. And, in that is the real treat. The motherboard can actually maintain that stable setting without needing anything else other than to save and exit. Sweet, huh? 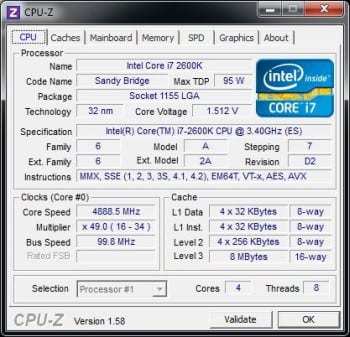 I tried using both offset and manual voltage at 1.5 volts. The system topped out at 4.9GHz using either. Stepping it up to 1.52 volts along with extra VTT and PLL voltage wouldn’t allow 5GHz. There was very little voltage drooping so it would appear this is as far as the PWM is willing to go.

When the system failed to post, the motherboard wasn’t always eager to recover to the BIOS. It was necessary to reset the CMOS (BIOS) to get out of the endless loop. While this isn’t uncommon, other motherboards have been more resilient to failed attempts and come back quickly asking for new settings.

Let’s continue with benchmarks to see how these overclocks translate into real world and synthetic numbers.