Adapters for Nearly Every Gaming Console

As mentioned in our video un-boxing the X-Arcade is truly a jack of all trades. Instead of buying separate arcade sticks for each of your consoles, as well as another one to enjoy MAME-fueled arcade classics on your PC (or Mac), the X-Arcade Solo can work with all of them. You just have to have the right adapter.

When you buy the X-Arcade Solo, you get one adapter included in the package. You can choose from the PC (USB PS/2), Wii/GameCube, PlayStation and PS2, Sega Dreamcast, and Microsoft Xbox adapters at the regular price. To get the PS1/2/3 or Xbox 360 + PS2 adapter, you’ll need to fork over an additional $9.95.

If you want to use the X-Arcade Solo with multiple machines, you’ll need to open up your wallet a little further to buy the necessary adapters on their own. Out the back of the arcade stick is a PS/2 (not PlayStation 2, but the kind of connector we used to use for mice) port and a serial port. The adapters plug into one or both of these. 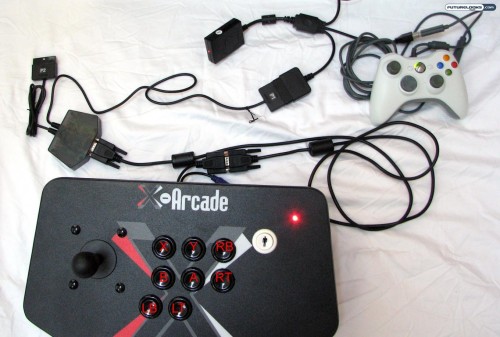 You can largely thank Microsoft for its unwillingness to allow for many third-party controllers. As a workaround, X-Gaming has come up with a multi-part solution that involves an adapter cable, a PlayStation 2 adapter, and a first-party wired Xbox 360 controller. The X-Arcade connects via a serial cable to the PlayStation 2 adapter. The PS2 adapter then connects to the Xbox 360 adapter, to which a wired Xbox 360 controller (not included) and your Xbox 360 are also connected. The need for a first-party controller really adds to the cost of this solution.

It was also disappointing to find that the button layout for the Xbox 360 is not mentioned in the included documentation that came in the box. I figured it out with trial and error (and labeled the image above), only to find that they have an official image on the website.

So, the X-Arcade Solo feels solid and all, but how does it actually perform when it comes to playing an actual video game. To test it, I played Super Street Fighter IV on my Xbox 360.

Thanks to its larger size and heftier weight, the X-Arcade Solo didn’t shift around nearly as much when firing off hadoukens and sonic booms compared to the Hori Wireless Fight Stick that came with the Tekken 6 Limited Edition Bundle. While it could be used on a tabletop, I felt that the X-Arcade was ultimately more comfortable in my lap. The controller was generally very responsive and I found it easier to perform the “double” motions required for Ultra Moves compared to the Hori Stick. I also prefer the North American-style concave buttons over the Asian-style convex buttons.

One meddlesome issue, however, was the third row of two buttons. I found that they would constantly get in the way when I was trying to hit the light kick and medium kick buttons. I also found that the “triple” button presses wouldn’t always be 100% responsive, particularly when trying to chain them into combos.

At just $100 (or cheaper if you find a deal online), the X-Arcade Solo represents a great value in the realm of arcade sticks. The high-end materials and parts really make this feel like a premium product. The overall performance is quite good, aside from a couple of relatively minor quibbles but the lifetime warranty is a real plus especially since products like this tend to get beat on. It also helps tremendously that this arcade stick can be used with almost any game console, so long as you invest in the right adapter.

Considering that a new Mad Catz Tournament Edition stick can cost upwards of $160, the X-Arcade Solo is almost a bargain by comparison. Too bad the Xbox 360 connection is so convoluted but that’s hardly XGaming’s fault.