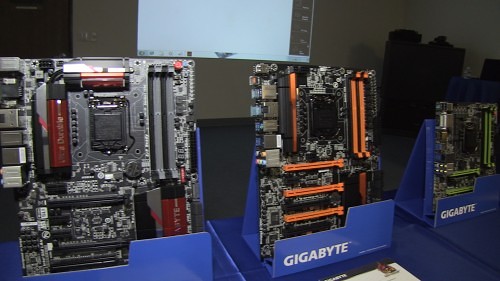 Today, GIGABYTE unleashes to the world, their entire onslaught of Intel 8 series motherboards based on the Z87 chipset and the new LGA1150 socket. We were fortunate enough to be one of few sites to have the chance to experience all of their new Z87 series motherboards including ones from their new “Standard Series” which includes their best looking board, the new “red” Z87X-UD4H, their “Gaming Series” and their two boards that feature a new audio feature called “AMP UP” that allows you to swap out the Op-AMP onboard for better sound quality, and finally their new “Extreme OC Series” which is built for extreme overclockers looking to break records and take names.

All of their new boards feature a brand new LGA1150 socket which requires a new Haswell CPU (review coming soon) and possibly, a new power supply, if you want to take advantage of the new C6/C7 enhanced low power states. All of the boards in the three series mentioned above, including their new “Thunderbolt Series” will feature their new Ultra Durable 5 Plus technology.

As part of our tour,we had an opportunity to talk to Tony Liao, GIGABYTE USA’s Vice President who says this is “the best GIGABYTE products … in recent years”. Colin Brix, their Technical Marketing Manager from their Taiwan HQ, talks to Eric about all the new features this new chipset series has to offer…

You can also watch the video directly on YouTube. Don’t forget to turn it up to full 1080p HD!

The MSRP and availability are still yet to be determined but we’re hoping that we see something very soon including reviews of the boards you’ve just seen covered in the video above. In the meantime, stay tuned for our review of INTEL’s Haswell Platform coming up very soon on Futurelooks!

Help Us Improve Our Video Coverage By Leaving a Comment Below!