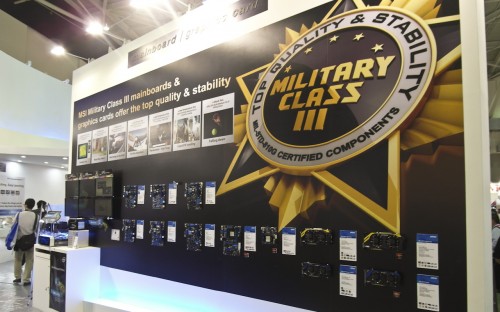 It’s that time of year again! COMPUTEX 2012 is now going full blast in Taipei, Taiwan and every company in the computer universe that you care about is there showing of their latest and greatest. We kick our coverage off with a look at what MSI was doing at the show. It looks like they are riding that AMD Trinity Train hard but also came up with a couple interesting things for all you overclockers out there that like to push their GPUs and CPUs too. Let’s check it out! 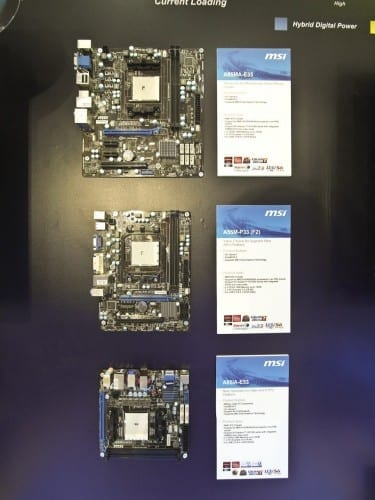 MSI was fielding a line up of brand new boards sporting the new FM2 socket for AMD’s Virgo APU platform. While AMD’s Virgo platform does still use the A55 and A75 chipsets, the FM2 socket doesn’t look backwards compatible with the FM1 socket at all. If you want on the Trinity train, you’ll need a new board.

Shown off at the MSI booth was the A85MA-E35 (A75), A55M-P33 (A55), and finally, the A85IA-E53 (A75). These boards cover sizes from mITX up to mATX and will be perfect for home theatre PCs or any other small form factor builds requiring an energy efficient platform with a fairly powerful integrated GPU. 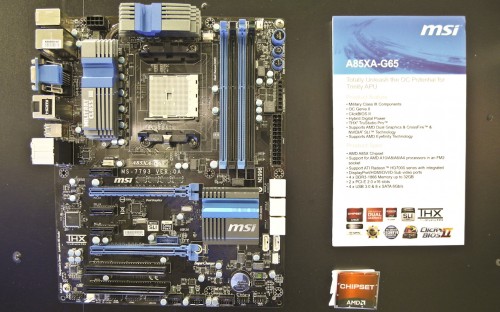 The most interesting board in the AMD Trinity line up with the full sized ATX A85XA-G85. Unlike the FM1 boards that came before it, this one sports all of MSI’s overclocking features like OC Genie II and even Military Class III components.  Add to that both nVidia SLI and AMD CrossFireX support, and this is definitely an interesting entry into the FM2 socketed arena. No pricing or availability was available but expect those announcements to be made soon. 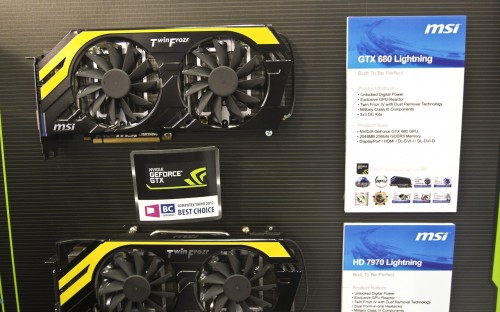 Both AMD and nVidia’s GPUs are getting cooling upgrades from MSI. With nVidia’s Kepler GPUs finally seeing better availability, MSI has decided to give their cards the Twin Frozr II cooling treatment.

The Power Edition gets the Twin Frozr II cooling solution (and some blue stripes) while the Lightning Series adds the racing yellow stripe to that cooling system and something called 3X3 OC Kit which gives you voltage measurement points, triple voltage adjustments, and additional temperature monitoring points on the card itself. This definitely sounds like the card you’ll be pouring LN2 all over. If you’re not going to do that, the Power Edition looks like it does just fine.

Both solutions are available for AMD and nVIDIA’s highest end GPUs from MSI like the GTX 680 and HD 7970. No pricing or availability was available at the time of this writing but expect to see those announcements very soon. 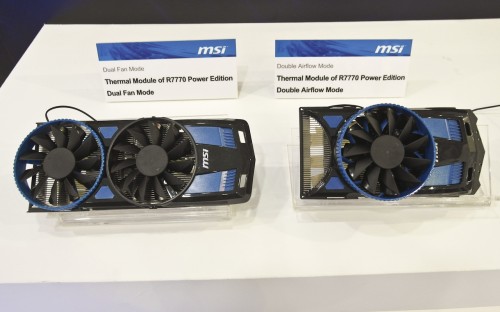 MSI was also showing off this interesting cooling system for their lower end cards. I’m not sure what to make of it, but apparently, you can remove the cooling fan externally and stack them or spread them out across a GPU to customize your cooling needs. The single fan cards obviously can only stack and somehow, this works to keep dust away. Neato. 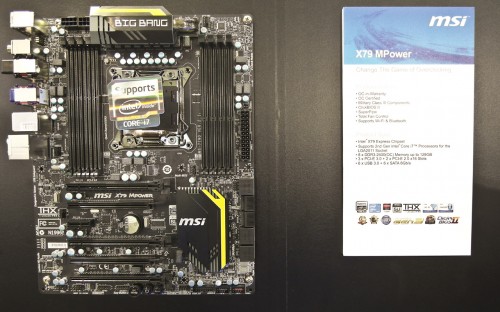 MSI’s most memorable “Big Bang” series of motherboards get another nod in the overclocking direction. These new boards are now “OC Certified” and it looks like OC accidents are now covered in warranty. At least that’s what I’m figuring from the signage. They’ve gone to the yellow and black “construction” look from the previous blue with ammo clips look. Of course we all know who does ammo and guns on their boards and I’m glade they’ve decided to do their own thing.

Both Z77 and X79 get massively upgraded “Super Pipe” cooling systems and sport voltage check points, OC Genie II, Military Class III Components, Total Fan Control, which turns your motherboard into a fan controller, and more that helps get your overclocking on. In addition to that, you get all the bells and whistles of a top end board like CrossFire and SLI support, Bluetooth, WiFi and other features becoming of a board of this level. The only question is, when will we be able to get our hands on one and how much?

Those are basically the highlights from the MSI booth at COMPUTEX 2012. Do stay tuned for more coverage from the show as we’ll be booting up our YouTube Channel and rolling out some of the quality video coverage you expect from us. In the meantime, check out the pics in the gallery below and discuss!