As hard drive sizes continue to balloon, we are constantly bombarded with the one and singular question that guides our choice when it comes to the storage in our systems: Do we want a hard drive that has incredibly fast performance, or incredibly cavernous storage space? Though you can almost get that with the many 640GB 2-platter models that dot the landscape, true performance comes with drives like the VelociRaptor or any of the solid state drives out there. Western Digital is hoping to break that trend with their “Black Edition” Caviar hard drives. 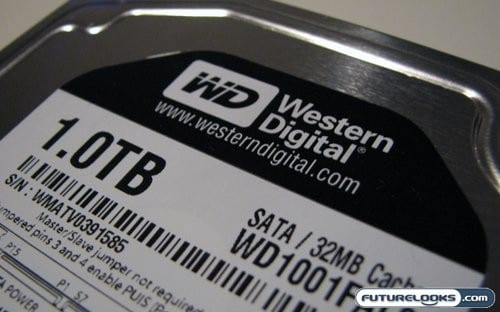 This latest drive represents a split in Western Digital’s line of hard drives. Rather than having a “one drive fits all” product line for standard hard drives, they’ve split it into three separate channels. You already know about the “Green” drives, which we used in our review of the Thecus N3200PRO NAS enclosure and are designed for cool, quiet and eco-friendliness. The next in the chain is the “Blue” series, which is made to offer the best performance and reliability for everyday computing. Finally we come to the “Black” drives, which are claimed to be the crème de la crème of performance desktop drives.

A Tale of Two Processors 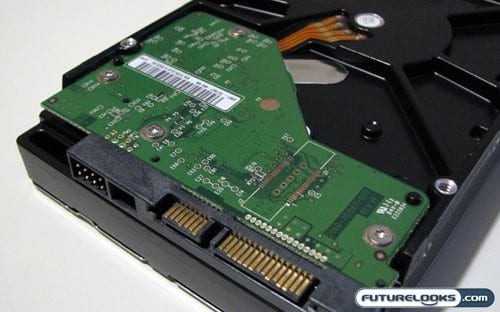 The Western Digital Caviar Black 1TB hard drive doesn’t look any different than any other 3.5″ drive. It maintains the same form factor, and follows the same SATA connector standards. This means you can use this in a case or NAS box that has a standard SATA backplane. With all that in mind, we are pressed to find any difference between this and another 1TB drive other then what is invisible or on paper.

Flipping over the drive, we find the controller board. However it doesn’t appear to have contacts that would give away the presence of two IC chips. Looks like there really isn’t any physical differences in this drive.

The features and specifications on these drives are geared towards getting the maximum amount of performance to serve a powerful desktop computer. What makes the difference is found inside the drive, and in the case of the “Black” drives is outlined below.

The rest of the specifications can be found on the product home page. As for pricing, the extra electronics and engineering found in the Caviar Black drives does command a slight price premium. Looking sites like NCIX, the average 1TB hard drive can be found for around $100 USD as of the publishing of this article. The Caviar Black drives on the other hand are priced between $30 and $35 more then that average. Is the extra price premium worth it? Let’s find out!

Since there isn’t any physical difference to separate this drive from any other, it’s up to the performance tests to tell us what the difference is. To test the Western Digital Caviar Black 1TB hard drive we installed it into the following rig.

In addition to the VelociRaptor we also included the WD Caviar SE16 and the Seagate Barracuda 7200.11 1.5TB drive in our tests. For testing software, we used HDTune and a couple suites from PCMark Vantage. HDTune was used to test the raw speed of the drive in both read and write, as well as access times. PCMark Vantage on the other hand was used to see how the Caviar Black drive held up in a variety of everyday tasks, and how the drive affected the speed with which those tasks were completed. Let’s go!