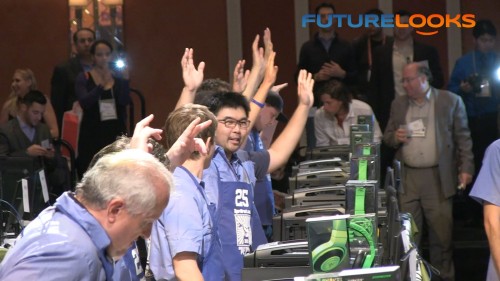 For two years, I held the record build time for the Tiger Direct Charity PC Race (2011 and 2012). And at CES 2013, I put that record on the line at one of the fastest races to date. Unfortunately, this year, I wasn’t able to defend my record and ended up placing 8th overall with a time of 6:22, which was a world away from my fastest time of 4:09. Many of you caught the live stream on Twitch.TV announced on our Twitter and Facebook pages and I really appreciated all your support as I strived to win it again for my charity, the BC Children’s Hospital.

If you haven’t already seen the video from this year’s event, you can catch it below… 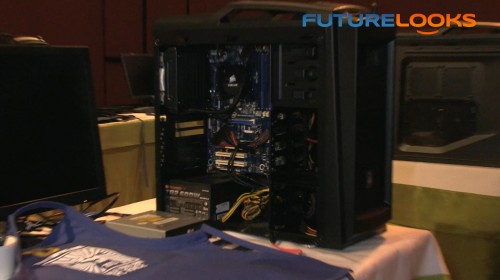 This year’s race was fast for a number of reasons. But most importantly it was fast thanks to developments in tool free chassis construction at lower price points. The Cooler Master HAF XM cases that were used for the build required little to no screwdriver power, which is also one of my biggest strengths in any assembly competition. Our systems also had less assembly than year’s past as we no longer had to “screw in” a lot of things like the drives and the PCI Express WiFi cards.

Although it’s pretty clear that this was more of a PC “Assembly” contest than a PC Building contest, it’s still done at a blistering pace and not knowing what you are doing can easily make you end up in defeat. Any mistakes are magnified as well due to the limited margins of time you are given if you want to reach the podium.

This year, racers did not have the benefit of a “cheat sheet” and were thrown two curve balls that enthusiasts would have scoffed at: a blank PCI slot was pulled out to simulate a component install and the second hard drive did not even have to be plugged in. These changes lead to both some of the slowest and some of the fastest times ever recorded at the event.

Where Did It Go Wrong For Me? 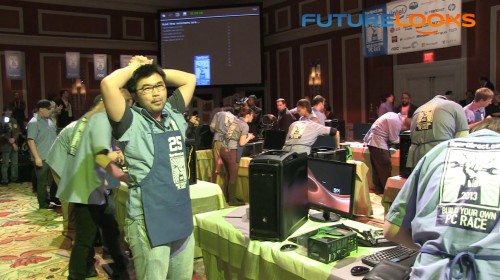 When your normal assembly time is under 5 minutes, you tend to know when things are going to go bad and what that’s going to cost you in seconds. Where it started to go wrong for me was at the start when I discovered that one of my tool free installation rails was actually missing a pin. Because the race officials can assess penalties for improper installation, this was weighing heavily on my mind. As a result, I ended up putting the rails on backwards, making the hard drives face the wrong way when placed into the case. Then, all the pins fell out of the rails as I tried to pop them back off to right my initial wrong.

When I finally righted my mistake, upon assembly, the drives pushed straight through the locking mechanisms, and ended up on the ground. Then a second time as I picked the case up to finish the assembly. By my estimates, these fumbles alone probably accounted for at least 90 – 100 seconds of added time. And the whole time, I worried that another 30 second penalty would be added for the missing hardware from one of the rails. Then the doors wouldn’t go on right as you saw me fumbling in the last few seconds of the video.

The Plan For Next Year…

As I reflect on what went wrong, I have to look at the positive side. My friend, Ben Heide from BCC Hardware ended up winning the event and as a fellow Canadian, I couldn’t be more thrilled. He also selected the Children’s Hospital in his own Province as the recipient of his winnings. Most importantly, we got to hear our national anthem.

Looking forward to next year, I’ll have to adapt to this new way of racing. It’s faster, less like building, and more like putting a list of things together faster than ever before. My screwdriver skills have definitely been nullified as of this event and I’m definitely going to have to take care of those missing parts before the start of next year’s race. The 2014 Tiger Direct Charity Race, I predict, will be even faster than the 2013 race and Ben’s great time of 3:53 is in jeopardy.

So I’ve already changed my site profile to reflect that I’m no longer the record holder. But I was still the only champion to hold the record two years in a row (2011 – 2012) and that’s something I can still be proud of. Working for me next year is the fact that I’ll be even more determined to win and the heat will no longer be on me, which is when I do my best. Till next year!