Connecting to Your Favorite AV Device

Since the Vuzix iWear AV920 can only support a resolution of up to 640x480, it's not surprising that you don't see any DVI or HDMI options for video input. That said, it can still be very versatile thanks to the included composite video cable. In this way, you can effectively connect any device that uses the usual yellow, red, and white cabling scheme that we all know and love. 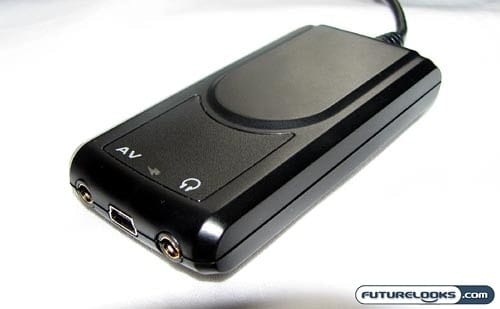 In this way, the iWear could be a good accompanying product for your portable DVD player or, should you want to keep your gaming experience as private as possible, even your video game console. If your smartphone or other similar handset has a video-out function, that'd work here too.

Remember that adapter box that comes out of the visor? There are three ports on the end of it. On the left is the single AV input and this is where you can insert a variety of cables and adapters. The middle one is a mini-USB port and this is used primarily for charging the internal battery. The right one is if you want to use your own headphones (or speakers) instead of the ones embedded in the visor. 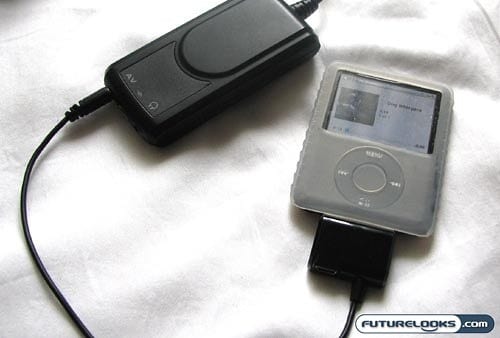 While you could certainly use the included composite video adapter cable to connect any number of different AV devices to the Vuzix iWear AV920, I think the best and most natural application would be with a video-capable iPod or iPhone. Thankfully, there is a cable included in the box just for this purpose.

It plugs into the dock connector on your iPod and any video (and audio) content can then be pumped through to the AV920. A virtual 65-inch screen sure beats squinting your eyes at a tiny two-inch display, right? Well, that's the good news.

The bad news is that you'll still need to navigate through the menus and playlists from your iPod's display. Only when video content is being played by your iPod will this content be shown on the iWear's twin screens.

This isn't Vuzix's fault though, since I found this situation to be the same with video docks and other similar devices. I'm assuming that the experience would be similar with an iPhone, but since I don't have a Jesus Phone, I can't say for sure.

Reminds Me of Nintendo Virtual Boy 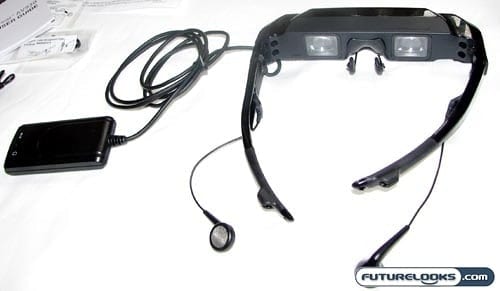 It's no secret that I used to be a pretty big Nintendo fanboy. Maybe I still am, but I never did buy or enjoy the Virtual Boy. That was one strange clunker of a device that never caught on and for good reason; it was doomed to fail from the start.

Well, we're back to the video goggle scenario with the Vuzix iWear, but this unit does several things better than the Virtual Boy. Yes, it still reminds me of Nintendo's epic failure, but it does some things right.

For starters, you don't need a stand to hold these goggles up on your face. They weigh less than three ounces, so they'll stay put like a pair of heavy glasses. I did find them to be a little uncomfortable for slightly longer viewing sessions, however. I am glad that these are a lot more compact (and collapsible) compared to the Virtual Boy too.