Comfort, Distance, and a Nose Bridge 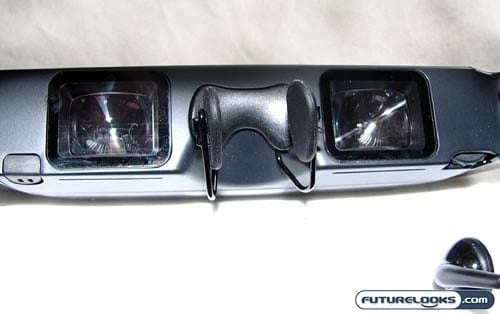 While the AV920 is relatively lightweight for what it is, it can still feel rather heavy resting on your ears and the nose bridge. The nose portion is supposed to hold this thing up and I still found that it could droop over time, even when I tried my best to adjust its fitting. That might have something to do with my Asian face as companies (like Oakley for instance) often produce frames built specifically for that target market.

This issue is further exacerbated because there is a definite distance between the inner edge of the AV920 and the front of my face. This is supposed to accommodate people who need prescription eyeglasses, but is incompatible with my Asian features as it puts the weight of the AV920 away from the face and leads to drooping.

Since the video monitors are so close to the eyes, I found that eye strain and fatigue can be an issue. Even while watching about five or ten minutes of video podcasts, my eyes started to get quite tired. This is even with brightness and contrast adjustments tweaked. 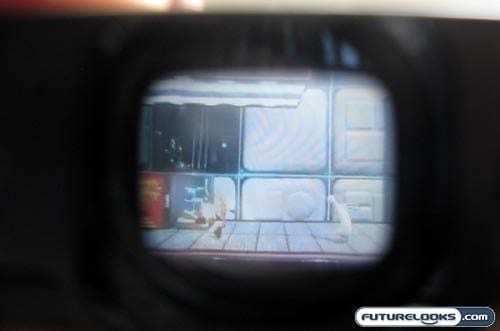 But what about the quality? There is a small VGA display for each eye and, when viewed at such close proximity, our eyes perceive these dual images as a single image. That part of the equation works very well.

However, the video quality is not without its problems. First, I found that the sides of the displays had a slight pincushion effect to them, pinching in both horizontally and vertically. Secondly, the video image is not nearly as clear as my experience of watching a larger screen from further away. It's not like the crisp image you get on a standard LCD monitor; it's more like an ancient CRT television image.

Considering that the AV920 sells for over $300, I expected better than this. The video is still watchable, I suppose, but the crispness is nowhere near what I wanted to see. Audio quality is acceptable, but don't expect the same aural experience as a set of premium earphones. Thankfully, you can use your own headphones with this should you so choose. 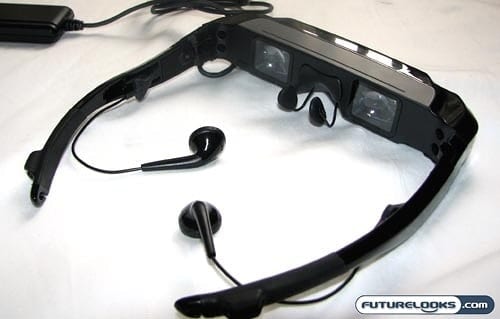 When I first read the press releases and saw the product display at the Consumer Electronics Show in Las Vegas, I was intrigued with the idea of video glasses. It seems like such a dorky, yet potentially awesome solution for watching videos the way they were meant to be watched: on a bigger screen. The kicker is that they made the big screen experience portable. That's in theory.

In practice, video eyewear like the Vuzix iWear AV920 still have a long way to go before they can come anywhere close to replacing a true big screen experience. You only get a VGA resolution with the AV920 and, even then, the video quality is mediocre at best. The comfort also isn't really there, both in terms of eye strain and the weight of a device slowly slipping down my Asian nose. Since there are a couple billion Asian noses out there, Vuzix might be wise to invest in some R&D for a better fit.

Will this experience improve dramatically with the upcoming release of the Vuzix Wrap 920 Video Eyeglasses? I sure hope so. It's not nearly as clunky, since it really looks like a regular pair of sunglasses. How it approaches the eye strain concern remains to be seen though.