For the last ten years AMD have consistently improved on a single architecture, which is an incredible feat all on its own. As a result, consumers have benefited from a cost effective upgrade path, generation after generation. While raw performance of AMD CPUs has started to lag behind because of this, we have seem some amazing bang for your buck platforms from AMD. There has also been return fire from AMD at INTEL in the form of the Phenom X6 Thuban , offering more cores for less dollars. After a few delays and a ton of rumors, we are finally able to show you the nearly mythic AMD Zambezi CPU with Bulldozer Architecture. Let’s see if AMD can strike back at the INTEL empire! 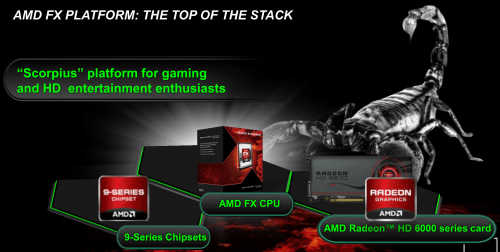 Like the AMD Spider, AMD Dragon and AMD Leo platforms before it, the new AMD Scorpius platform consists of CPU from the AMD FX lineup, an AMD 900 series motherboard, and an AMD HD 6000 series graphics card. While the 6000 series GPUs have been around for some time, it has only recently been joined in the market by the other two pieces of the Scorpius Platform.

The major difference between the 800 and 900 series motherboards is the latter also including support for Nvidia SLI as part of the AMD chipset. This is great news for AMD users as it opens up Nvidia to multiple GPU setups.

The Anatomy of a Bulldozer

Zambezi, which is the name for all FX series CPUs, all use the Bulldozer architecture. In this unique design AMD has taken two independent CPU cores and combined them into two core modules. These modules will still have a separate integer blocks, L1 caches, schedulers, and with the scheduler connected via 4 pipelines. These two integer cores will share a FP scheduler, 2MB L2 cache, two symmetrical 128-bit FMAC (fused multiply-add capability) floating-point cores, decoder, and fetch block.

Some will argue that shared portions means that the Zambezi chips are not “true” octa-core processors. This is not exactly true. The vast majority of CPU tasks are integer based and will thus have eight cores for processing. This is also true for 128-bit floating point calculations as each module has two 128-bit FMAC. The only time Bulldozer will work like a 4 core chips is with 256-bit floating point calculations as the two 128-bit will be combined to run in 256-bit. This is why the FMAC blocks must be symmetrical, which relates to the scheduler, and ensures one does not lag behind when receiving instructions.

The Bulldozer modules are then placed on a single chip in sets of two, three, and four to create quad-core, hexa-core, and octa-core chips. These modules are then interconnected through a single unified shared 8MB L3 cache. This brings the FX-8150 and other octa-core FX chips to just over 16MB of cache.

The Bulldozer architecture does not stop at a new design for the cores, as it also boasts an all new memory controller block. We got to see a preview of this with the APU review, but I will be running the FX-8150 at the new AMD stock spec of 1866 MHz. The obvious difference when compared to older AMD memory controllers is support for higher clock speeds and better memory throughput. Under the surface you will also find that the memory controller adds an additional 8-bits to each channel, bringing it up to 72-bits per channel, but are used solely for error correction. This should help ECC which is normally only used in servers, but should provide no additional benefit for desktop users.

The Zambezi chips also sport the new Turbo Core version 2 from AMD. Turbo Core v2 now has 2 boost states. The first boost state is for all eight cores and the second boost state is for only 4 cores. The FX-8150 has a default clock speed of 3.6 GHz, eight core turbo of 3.9 GHz, and 4 core turbo of 4.2 GHz. This means a task that uses 4 or few threads should see four 4.2 GHz cores for this task and allow the other four cores to drop to idle state. This saves power while providing the best performance for low thread count applications.

Bulldozer also has several bumps in speeds. The FX-8XXX chips will all have a default HyperTransport/North Bridge frequency of 2.2 GHz (200 MHz higher than FX-6XXX, FX-4XXX, and past AMD chips). Since this is a double data rate link, you get an additional 400 MT/s (Mega-transfers per second). This increase in bandwidth between the CPU and Northbridge should reduce GPU bottlenecks, improve device throughput, and allow for more devices to be connected without performance loss. 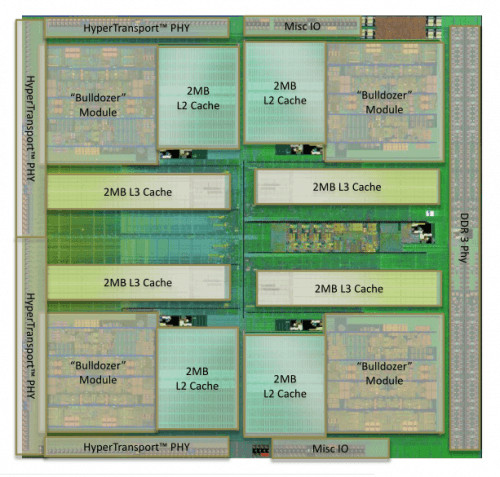 The final piece to the Bulldozer puzzle is support for a battery of new instruction sets. For instance, a CPU is a calculator and crunches math equations. It is capable of performing simple math equations such as A = B + C at a rate of several million per second. Instructions sets are collections of these simple equations with updates being shortcuts that increase the number of equations that it can perform.

The new instructions include sets for SSE4.1, SSE4.2, AES, AVX, XOP, and FMA. While this seems like a minor update, these instruction sets can make a world of difference in certain tests and applications. It is possible for your CPU to turn 8 clock cycle tasks down to 4 or few cycles. In some cases, especially with AVX, you could gain 4 or 5 times the performance. When you place multiple Bulldozer modules, add the memory controller, L3 cache, and new instruction sets you get an AMD Zambezi processor.