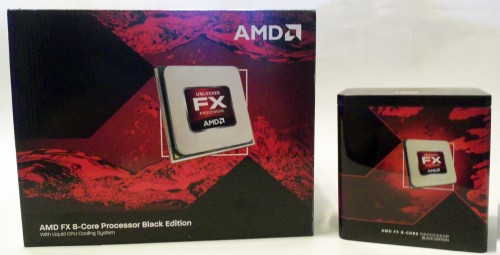 There will be two variations to the FX-8150 retail PIB (Processor in a Box). There will be a standard air cooling version which will be sold in a metal container. The container has a cut out on the side to display the chip in much the same way AMD has done in the past. Even though my FX-8150 is retail, I did not receive a complete retail box. I suspect AMD will use the same packaging and air cooler as the Phenom II lineup. 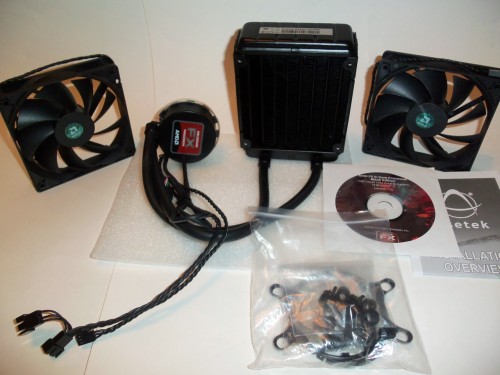 The second retail box of the FX-8150 will come in a cardboard box of significant size which comes with a liquid cooling system from Asetek. It is similar to the Antec Kuhler H2O 920, just branded for AMD. This will be the first time a liquid cooler bundled with the CPU from the factory. This is an interesting idea to say the least as this will allow AMD to make a little extra money, provide enthusiast with stock cooling they will not replace immediately, and introduce liquid cooling to mid-range users.

The first thing you want to be sure of when using an FX CPU with a compatible 800 series board is to verify you are using the most up-to-date BIOS. If you use a BIOS that does not have support for FX, you will not get a post screen. It is still a good idea to update to the latest stable BIOS with even your 900 series motherboard, but all should work with their factory installed BIOS with no issues.

As you can  very plainly see, we are pitting the outgoing Leo Platform (890FX) against the new Scorpius Platform (990FX). We have even been able to procure a GIGABYTE 990FX-UD5 board, courtesy of GIGABYTE USA, to allow us to do a proper head to head battle with its older counterpart, the 890FX-UD5. For anyone looking to upgrade from Leo to Scorpius, we are about to let you know where you’ll see benefits and allow you to figure out if the jump is worth your money.

The GIGABYTE BIOS on the two motherboards in my tests are practically identical. Neither have a UEFI, but instead settle for the tried and true standard BIOS we have come to know and love. There is one major difference in that the 990FX board responds 10 times better to me pressing and holding delete to enter the BIOS. I am not sure what GIGABYTE changed, but it makes the 990FX much easier to work with.

I will not be going into depth for this part one of our review, but I can give you a glimpse of what is to come. After some tweaking, I got my FX-8150 stable at 4.74 GHz and 2.4 GHz Northbridge. More on this in part two of course.

Before we dive into testing, there is a little something about the design of Bulldozer which can effect its performance. While marketed as an eight-core processor, Bulldozer is more like a cluster of four, dual-core processors due to its modular design. This does not seem to ready effect general performance, but it does create thread scheduling by creating an better way to handle multiple thread application.

As the Operating system still has control over thread execution, there are occasions where the task scheduler will use a non-optimal allocation of threads. This occurs when two interdependent threads are run on different modules. If two threads are interdependent you can gain small improvement in performance if both threads are run on a single module. In this scenario, when thread 1b needs something from 1a, it can access it from the L2 cache. If these are placed on two separate modules, this information would have to be passed through the L3 cache. While the processor can handle this no problem, it is a sub-optimal execution.

This architectural quirk can be resolved, but it would require Microsoft to update Windows 7. According to AMD, the issue with interdependent threads is not a problem for Windows 8 Dev. Improvements in Windows 8 result in 1% to 10 performance gains in games. We will test this in depth in part two as well. I hope to see an update to Windows 7 in the very near future to mimic or improve upon this behavior.