NVIDIA”s next generation GPU architecture is already out in the wild. It’s called “Maxwell” and it comes in the company’s current GTX 750 and GTX 750 Ti products. But the question is, when will we see Maxwell in higher end products? Well, Chinese website Gamersky has unveiled a number of reasonable quality phone shots of  a new NVIDIA based GPU, uncovering much new information about the shape that the company’s new top end cards may take.

According to the site, the PCB photo above is a very early version of a graphics card design, rumored to be based on what may be the “legendary GM210” GPU, or what is rumored as GeForce GTX 880. This very well could be, the successor to the current high end GK110 “Kepler” based GPU that powers the GTX 780 and GTX 780 Ti among others (like Titan and Tesla). As an A1 revision, it’s still quite early on in its development. The markings on the GPU set the origin of the chip as the TSMC factory in Taiwan, and was manufactured within the first 21 weeks of this year, setting its birthday on May 21, 2014. The card was likely created as a sample to show off to partners and developers at the recent COMPUTEX 2014, in closed door meetings during the event.

In terms of memory, the new GPU will likely be running with 8GBs of GDDR5 memory, or may come in a version with 4GBs and 8GBs (current top end cards come in 3GB and 6GB). You can already see eight 512MB Hynix modules on the front side, and there is another eight on the back as well. Based on the photos, the modules are R2C which means speeds of up to 7000MHz can be attained. 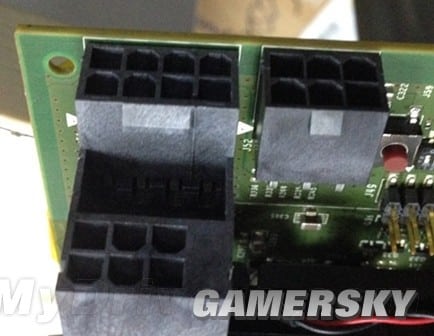 One other interesting thing about the card, among many interesting things, is the power connector configuration. While even NVIDIA’s current top end cards max out at two 8 pin PCI-E connectors, this particular card runs one 8 pin connector, plus two more 6 pin connectors. Of course, this is totally a prototype, and we can’t see how a 375 watt card could be practical in this day and age of better performing GPUs at lower wattages. With the excellent performance per watt of the current GTX 750 and GTX 750 Ti Maxwell based cards, we’d expect that work would be done to make even the top end card, more efficient.

So it looks like the new GTX 8xx series cards are well underway in their development. But at this stage, it’s anyone’s guess as to what form the finished product will take.