There are many portable gadgets on the market that come equipped with great processing power. Smartphones and tablets are just a couple of the things that harness such power, and that we can’t live without today. But when I saw this video of Linux running on Canon DSLRs, that’s when I understood how truly powerful some of our consumer gadgets really are, and how far processing power has progressed in smaller form factors. Just look at what ASUS has done with the Chromebit, which is essentially, a USB stick PC running ChromeOS!

MagicLantern, which is a collective of independent programmers, hackers, and camera enthusiasts, came together long ago to unlock the potential inside Canon’s cameras. They unlocked features that made iconic filmmaking DSLRs like the Canon 5DMKII, even more useful, by adding functions that helped you pull focus, monitor audio, and even, shoot at resolutions, formats, and bit rates, that the company never designed the camera to do. 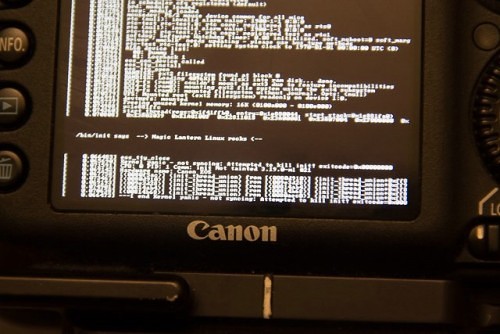 For the most part, Canon has left them alone, as their “hacks” ran on top of the underlying firmware. However, this next step might be the key to unlocking the ability to take full control of the hardware. And being able to simply boot into Linux, is a major step forward in this endeavor, just as how the Hackintosh community took off when OSX could boot on PC hardware. This would essentially bypass Canon’s “walled garden” and allow developers to start creating features and plugins that extend the functionality of otherwise capable older cameras, that are locked down by its native firmware.  Since some cameras on the market are already using Android OS, like Samsung’s Galaxy Cameras, that would be a very logical next step.

Hopefully Canon stays hands off on this, but instead, observes and uses it for inspiration in future products and features that they can “officially support”. But if it starts hurting future camera sales, then we might see some pressure. One can only hope that this might spur them on to innovate, which is an area that Canon has been behind on, seeing as they are the last company to do 4K in any meaningful capacity.

While we don’t normally think about cameras as PCs, it’s very clear that the hardware underneath, has the capability to do more. As enthusiasts, we’re always upgrading our systems with hardware, but when constrained by hardware limitations, software is the next most powerful way to customize. I can’t wait to play Crysis on a Canon DSLR one day.