A Flexible and (Almost) Universal Solution

Some of the other sites on the Internet that have reviewed or encountered the GoFlex system from Seagate thought that it used a proprietary connection. Upon first glance it may look that way, but in reality it doesn’t. The GoFlex system actually uses a standard Serial ATA (SATA) connection.

It works best (and looks best) if you use GoFlex hard drives with GoFlex adapters, of course, but you could just as easily use one of the adapter cables with your own bare SATA drive. This goes for any of the available cables in the GoFlex arsenal. This is actually quite handy because we all know how much of a pain it can be to get the data off an old hard drive if it’s still stuck in a notebook. Now all you need to do is pull the drive and plug in a GoFlex cable of your chosen interface.

Whatever the case, any of the drives (and other devices) can be paired with a variety of connection styles. This almost makes it future-proof, as Seagate can release a new adapter cable when it needs to do so. That’s what they did with USB 3.0.

The build quality of the components isn’t really anything to write home about, but what about the performance. That’s what we want to know, right?

To test the data transfer speeds, I used CrystalDiskMark 3.0 on my Dell Inspiron 640m. The test rig has an Intel Core 2 Duo T5300 (1.73GHz) processor, 3GB of RAM, and XP Home SP3. The Seagate FreeAgent GoFlex drive was used with both the USB 3.0 connection and the USB 2.0 connection, and it is compared with a USB 2.0 Seagate FreeAgent Go 250GB drive and a Kingston DataTraveler 150 32GB USB flash drive. 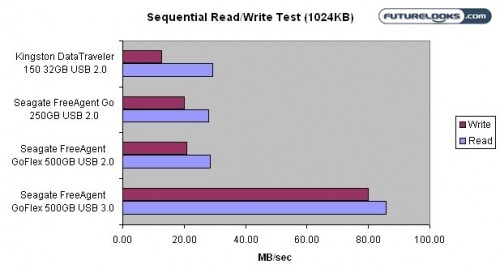 None of these numbers come close to the claim of USB 3.0 improving speed by “up to ten times” compared to USB 2.0, but it’s still a great deal faster. To get real speed, the Kingston HyperX USB 3.0 SSD might be more your cup of tea. It was going as fast as 195MB/s for read and 160MB/s for write. This is actually much faster than most internal platter based hard drives.

It can be quite the pricey endeavor to buy a new notebook, especially when you’re only interested in a single upgrade. The FreeAgent GoFlex system is quite intriguing, in this regard, because what was once a USB 2.0 drive can be instantly transformed into a USB 3.0 drive.

The USB 3.0 Upgrade Cable Kit isn’t exactly inexpensive at $79.99 US or less, but it’s not too rich for my blood either. The near quadrupling of speed in sequential data speeds can be very appealing and it’s reassuring to know that your GoFlex portable drive can be upgraded to another standard when you need to do that too. That’s quite a bit of value right there.

It would have been nice if the USB power cable wasn’t necessary, as it would make for a cleaner installation. I also would have liked if the ExpressCard adapter didn’t protrude as much, since I could then just leave it in there when I travel. Even so, the GoFlex USB 3.0 upgrade kit is a worthy purchase for any computer speed demon in the making. Definitely one of the more value oriented upgrades you can make to your system.